This article is about the creature itself. For the series named after said creature, see Metroid (universe).

Metroid (メトロイド) is the eponymous recurring artificial organism in the Metroid series which also appears as an Assist Trophy in Super Smash Flash 2.

The Metroid was created long ago by an ancient tribe known as "The Chozo" in order to fend off a threat known as the X Parasite. The Metroids were discovered on Planet SR388 years after their creation. After the Space Pirates discovered the Metroids, they were promptly used as bioweapons, due to the Energy Leeching abilities the creatures possess.

In the original Metroid, Samus was sent to Planet Zebes to destroy the Space Pirates, as well as dispose the stolen Metroids. In Metroid II: Return of Samus, the Galactic Federation noted the danger the Metroid posed, and called upon Samus to go to SR388 to eradicate the Metroids once and for all. During the last battle with the Queen Metroid, an infant Metroid hatched and imprinted Samus as its mother. This last Metroid became known as "The Hatchling" and would become one of the most important Metroids in the series.

A Metroid appears as an Assist Trophy in Super Smash Flash 2. When summoned, the Metroid flies around the stage, targeting the nearest opponent. Upon making contact with one, it will latch onto them and start draining their energy, dealing continuous hits of 3% damage each before eventually letting go after attacking thirteen times. Movement is not hampered when a Metroid latches onto an opponent, as they can move about freely. The Metroid can also be attacked, which can cause it to let go of the opponent early. After a certain period of time, or if the Metroid does not latch onto an opponent after six seconds, the Metroid disappears.

A Metroid on Phase 8.

A Metroid latching onto Black Mage on WarioWare, Inc..

Yoshi attacking a Metroid and Tails on Krazoa Palace. 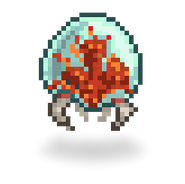 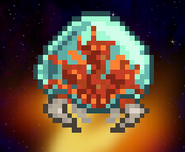 A Metroid on Sector Z. 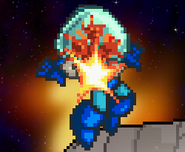 A Metroid latching onto Captain Falcon.

Captain Falcon repelling a Metroid with the Knee Smash.