This article is about Mega Man's appearance in Super Smash Flash 2. For general information about the character, see Mega Man.

Mega Man is a veteran starter character in Super Smash Flash 2. Mega Man's moveset consists a variety of weapons and adapters from many of his classic games. His sprites are custom-made and based on his appearance in Super Smash Bros. for Nintendo 3DS and Wii U with him receiving some attacks of his moveset from said game but also including some moves not present in the two latter.

Mega Man is currently ranked 29th on the tier list, placing him the B tier. Mega Man's strengths are his strong array of projectiles, giving him decent approach options and allowing him to gain stage control as well as trap opponents into favorable positions. Mega Man has a good combo ability to rack up damage, a good projectile game, good range in the majority of his attacks, and KO moves in his forward tilt, down smash, up aerial, back aerial, up tilt, and fully charged Mega Buster when near a blast line. His Crash Bomber can also pressure shields quickly and effectively, and can lead to earlier KOs thanks to its ability to be detonated on command by the player.

However, Mega Man is susceptible to combos and juggling, due to his above average weight and average falling speed. He also suffers from an average running speed and overall slow close-ranged moves, causing him to struggle against fast characters. His only means of recovery is generally Beat Call, which while having heavy armor and being able to cancel into an aerial, is predictable and can put Mega Man in a bad situation if caught. While it covers a long distance overall, it's slow and lacks a hitbox protect Mega Man, as he can only use use an uncharged Mega Buster while Beat is carrying him, or the move will be canceled. The majority of his projectiles are linear and can be bypassed or reflected by those who read his movements correctly. Mega Man also has trouble with closing out stocks, as his punish game is very strong for dealing damage but does not convert well into taking a stock.

Mega Man is a projectile-centered character with great zoning capabilities. He has a great projectile game with having various projectiles in his special moves. These projectiles can also be comboed into each other, leading to high damage output depending on the opponent's weight and hurtbox size. He also has disjointed range in some of his attacks, which can help him space out opponents or edgeguard from a safe distance. He has reliable finishers in his forward tilt, up tilt, down smash, back air, initial part of up air, back throw, fully charged Mega Buster, and Crash Bomber.

Mega Man has a strong projectile game led by his Mega Buster, which is a chargable move with a hitbox on frame 1 when released. This gives Mega Man an unreactable KO option in close or mid-range for whiff punishing, as well as covering defensive options such as rolling or jumps out-of-shield (and can lead to shield pokes if the opponent does not act for an extended period of time). Mega Buster can also be used as a spammable projectile in its uncharged (stage 1) and semi-charged (stages 2 and 3) states for projectile camping, racking up damage, breaking out of grabs, or interrupting approaches. Additionally, the player is able to change the direction they are facing in midair when charging the move, giving the player to perform reverse aerials in midair without any other input.

Water Wave is another strong projectile and arguably one of the best projectiles in the game. Water Wave is a transcendent projectile which travels along the ground and launches opponents upwards, giving Mega Man notable stage control and coverage on ground approaches in addition to follow-ups with smash attacks and aerial attacks. This projectile also is made up of multiple smaller projectiles, making it difficult to reflect unless the opponent has a long-lasting reflector (which can also make the opponent vulnerable to other non-projectile attacks) and allowing it to deal large amounts of damage when combined with an uncharged Mega Buster to cause all the hits to connect. Water Wave also can hit opponents hanging from a ledge, being one of the few moves with this strength of ledge pressure. Crash Bomber is another strong projectile, allowing for strong KO potential at lower percents, shield pressure, and ledge trapping. As it can be detonated remotely, it can severely decrease the needed damage to KO an opponent from any of Mega Man's KO moves, and it can also be used to setup into shield breaks or shield pokes when pressuring an opponent with another move such as Mega Buster. Additionally, using a technique known as Leech Bomb, Crash Bomber can be attatched to the walls of stages, allowing the player to remotely detonate it as an opponent gets near to launch them and attach another projectile to them.

Mega Man also possesses an effective aerial game, with all of his aerial attacks being disjointed and relatively versatile. His forward aerial is considered his best, as it lasts a considerable duration with little startup or ending lag and has solid range, making it a great spacing and approaching tool in addition to a combo starter and poke. His neutral aerial is long-lasting as well and surrounds his whole hurtbox, making it useful for landing in addition to combos. His up aerial is another strong projectile that travels a large distance directly upward, being able to pressure opponents above him and even land early KOs to opponents close to the upper blast line. In addition to his aerial attacks, his up special move, Beat Call, is effective in both recovery and controlling the air. Notably, the move can be canceled with an aerial attack at any time (known as Beat Cancelling), allowing Mega Man to use Beat Call to gain a few frames of heavy armor before a move, turn around quickly to instantly use reverse aerials, or outright use aerial attacks out-of-shield without being hindered by jumpsquat. It also allows Mega Man to recover using air adjustments in his movement while outspacing attempted edgeguards, and his recovery can be improved further by canceling it into back air, which gives Mega Man a horizontal boost in momentum.

Mega Man has a decent grab and throw game as well, as he can use back throw and down throw at early percents to start combos, though he has to read the opponent's DI correctly to perform the follow-up. Back throw can follow-up into back air or up air, and down throw can be followed with a neutral air, forward air, or up air. Forward throw can be used to set up early edgeguards and tech situations. Back throw and forward throw can also be used as reliable finishers at high percents when near the ledge, with back throw having higher knockback.

However, Mega Man also has several weaknesses, with one being his relatively poor close-quarters combat. Many of his strongest grounded attacks, including his up tilt, forward smash, and down smash, suffer from considerable startup or ending lag. Barring neutral air, faster moves such as his standard attack and dash attack are often poor or unreliable at knocking opponents away. His projectiles, while strong, are also mostly linear, and his heavy reliance on them can cause him to suffer against opponents with reflectors or other ways to counter them. Another weakness is his recovery, with Beat Call being his only method of vertical recovery. Although the move covers a large distance and has heavy armor throughout the duration, its path is also very linear and predictable, leaving Mega Man vulnerable with only uncharged Mega Buster shots to defend himself without canceling the move.

Mega Man's other weaknesses generally relate to his base stats, such as his average weight and modest running speed, which can cause him to become easily trapped in disadvantage or take significant amounts of damage against most of the roster. This, combined with how his overall moveset lacks fast frame data or good close-quarters combo potential, causes the character to be forced into a more defensive and slow playstyle, which becomes a bigger disadvantage against many other characters with an explosive punish game. While a good player can use Mega Man's tools to exploit opponents in neutral, this is not as beneficial against approaches that come from diagonally above him, as Mega Man lacks notable moves which can cover that area. Thus, characters who have good air approaches or are able to bait approaches with multiple jumps, such as Meta Knight or Isaac, can do very well against Mega Man.

Overall, Mega Man is a versatile ranged fighter, possessing great range and spacing tools while having difficulty up close. He carries considerable combo and KO potential in many of his projectiles and disjoints but is held back by his overall slow close-ranged attacks and average stats, forcing him to keep his distance with opponents until he is able to risk using one of his slow but powerful finishers. 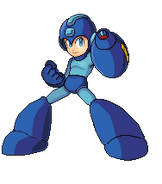 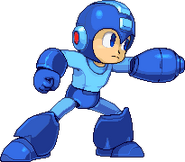 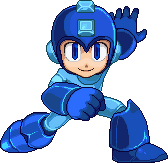 Mega Man using his up smash on Skull Fortress.

Mega Man using his down smash on Skull Fortress.

Mega Man in the air while Mario, Link, and Donkey Kong standing on Hueco Mundo.

Mega Man using his down smash to attack Ichigo and Naruto on Galaxy Tours.