When performed, Mega Man holds his Mega Buster, his arm cannon, in front of him and fires a plasma shot forward. Tapping the special input will fire a small, slow plasma bullet in a straight trajectory forward, dealing minimal damage and little to no knockback. Up to three can be fired at once, and they can be fired while walking and jumping. Holding the special move input will charge energy for a bigger and more powerful shot. There are four stages of charge depending on how long the input is held down for:

The player can move around while being able to jump and double jump while charging, but they cannot grab the ledge and will lose the charge upon flinching. They will also turn around in the air if the opposite directional input they are facing in is pressed. The player also will be unable to use their up special for a few frames after using Mega Buster.

Level 1 shots can also be fired while using Mega Man's up special move, Beat Call, where they have the same properties as their normal variants.

The Mega Buster has been Mega Man's default weapon in nearly every game he appears in, ever since the first game in the Mega Man series. The standard energy bullets, known as "Solar Bullets", are weak but can be rapid-fired with up to three appearing on-screen at a time. It was not until Mega Man 4 that Mega Man could charge his Mega Buster for a more powerful "Charge Shot", which could be done by holding the same button used to fire. Mega Man could run, jump, and climb ladders while charging, but in certain games, getting hit while charging will lose the charge. Overall, the Mega Buster functions nearly identically to how it does in SSF2, only in this game shots cannot go through walls and Charge Shots pass through opponents even if they do not defeat them. Additionally, most games in the series do not cause recoil on Mega Man after firing a full Charge Shot, as this is only present with the Charge Shot in Mega Man III and Mega Man IV for the Game Boy, as well as with the Final Charge Shot in Mega Man 11.

A glowing level 1 Mega Buster shot and one not glowing.

Kirby's version of the chargeable move.

Kirby's version of the air move.

Mega Man using Mega Buster at level 1. Note the lack of a glow. 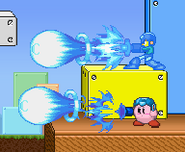