McLeodGaming Wiki
Register
Don't have an account?
Sign In
Advertisement
in: Attacks, Special moves, Down special moves,
and 4 more

This article is about Mario's down special. For Luigi's related down special, see Luigi Cyclone.

Mario Tornado (マリオトルネード), also known as Star Spin (回転星型), is a recurring attack used by Mario in the Super Smash Flash series. In both games, Mario spins around rapidly, trapping opponents who get sufficiently close, before entering a spread-eagle stance and bashing foes away.

In the original Super Smash Flash, Mario Tornado is Mario's down aerial. The move is slightly quicker than the Super Smash Bros. Melee version of the attack, with little to almost no hitstun, but still a very damaging move nonetheless.

In the reboot, Super Smash Flash 2, it has become Mario's down special move. The move now possesses considerably more knockback and hitstun than its counterpart in SSF, and can now be used for recoveries as it allows Mario to hover in the air momentarily when the special move button is mashed. It is also one of the best momentum canceling moves in the game. As a nod to the spinning attack from Super Mario Galaxy, the Baby Luma comes out of Mario's cap during the ending strike, but is merely a cosmetic addition.

The Mario Tornado is likely based on the Spin Jump move that originated in Super Mario World. The Spin Jump has lower vertical range than Mario's regular jump, but it deals more damage, fully defeating enemies who otherwise take two hits in order to be defeated — such as Koopa Troopas and Galoombas —, while also offering protection when landing on spiked hazardous objects or enemies. Lastly, Spin Jumps can also break Rotating Blocks from above, if Mario is not Small.

Since the move's appearances in Super Smash Bros. and Super Smash Bros. Melee, the Spin Jump has continued to appear in Super Mario games. While its higher damage and block-breaking power are now the job of the Ground Pound move instead, Spin Jumping tends to cause Mario to fall slower and bounce higher off enemies.

The Baby Luma coming out at the end of the attack on Galaxy Tours.

The final blow of Mario Tornado.

Mario using his move in the air then towards Sonic on Test Stage 1. Note the demo v0.3 design. 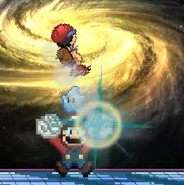 Mario's second design of the Mario Tornado being used on Ness.