Magikarp, known in Japan as Koiking (コイキング), is a Water-type Pokémon; it evolves into Gyarados starting at level 20. It can be released from a Poké Ball in Super Smash Flash 2, though it is quite useless.

Magikarp is a reddish-orange, medium-sized fish. Its notable characteristics include large, heavy scales. Its fins are primarily white, but it has two stiff, three-peaked fins on its back and stomach which are both yellow. A female Magikarp has long white barbels and a male has tan ones. The male also has a slightly bigger light band on its forehead compared to the female, suggesting it is slightly larger. Long-lived Magikarp are able to utilize their immense splashing power to leap high enough to jump mountains. Magikarp also have a strong enough immune system to survive in the most polluted of waters.

Although this Pokémon is capable of surviving in even the most polluted ponds, it is usually overlooked by trainers because it is pathetically weak: even in the heat of battle it will do nothing but flop around. It is not a strong swimmer, and currents in the water will sweep it downstream. They are normally seen using Splash, which is unusual, as it makes them easy targets to predators. Before the species multiplied, it is believed that the ancestors of Magikarp were actually much stronger than the Magikarp seen today, and this belief has led scientists to research this species. For no reason, it jumps and splashes about making it easy for predators like Pidgeotto to catch it mid-jump. Magikarp is found in many bodies of water, such as lakes, rivers, and ponds. However, due to its weak swimming ability, it usually lives downstream of the water's flow. Magikarp are extremely plentiful, living in almost any region. Despite its abundance, no one really knows how this Pokémon survived, given its physical disabilities and tendency to put itself at risk.

As stated above, Magikarp has a small chance of being released from a Poké Ball in Super Smash Flash 2. It replaces the role of another Fish Pokémon, Goldeen, that was in the three Super Smash Bros. games. Whenever it is released from a Poké Ball in SSF2, it proves its reputation as a weak and useless Pokémon by doing nothing but using Splash constantly, which has no effect on the player characters; thus, no damage or special effect is dealt.

Magikarp next to Link on Mushroom Kingdom II. 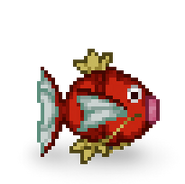 Kirby using his forward smash at Samus next to Magikarp on Mushroom Kingdom III.