This article is about Lloyd's appearance in Super Smash Flash 2. For general information about the character, see Lloyd Irving.

Lloyd currently ranks 13th on the tier list; a small drop from his 9th-place position on the previous tier list. Lloyd has very strong combo potential, above average ground mobility, fast attack speed, and disjointed hitboxes in almost all of his attacks. He also possesses one of the longest grabs for its startup time, and good throws that allow for easy followups. He has the ability to immediately cancel his recovery into any aerial attack, which makes him very difficult to edgeguard due to his aerial prowess. He can also increase his horizontal distance in the air with Rising Falcon. On top of this, he has a great onstage edge guarding game, due to the very long active duration on many of his attacks, especially Beast. His down special move, Rising Falcon, is very similar to Captain Falcon's Falcon Kick, in which when used in air, he plunges downward, and regains his midair jump after using it. Unlike Falcon Kick, if used on the ground he will rise up into the air and then perform the move. He also possesses a projectile in Demon Fang, which can chain into itself at low percentages. He also possesses potent killing moves in his down smash, up smash, forward aerial, back aerial, forward tilt, and Sonic Thrust. All of these traits combine to give Lloyd not only an outstanding punish game, but also a great neutral game as well, allowing him to outperform virtually any opponent by utilizing different aspects of his incredibly diverse toolset to his advantage.

However, Lloyd's vertical recovery, Tiger Blade, covers a short vertical distance which makes it one of the worse recoveries in the game. This weakness is further exposed by his greater tendency to end up offstage due to his below average weight. He has some difficulty finishing off his opponents if he allows them to take too much damage. Despite having a long range, very few of Lloyd's attacks actually cover his hurtboxes, leaving him vulnerable if his opponent gets uncomfortably close to him.

Lloyd has good representation in online tournaments, as his strength as a character coupled with his low difficulty curve make him very attractive to competitive players who wanted to succeed with a minimal amount of effort, to the point where many high-level players have him as at least a pocket secondary.

Lloyd is categorized as a lightning bruiser in this demo, possessing many strengths with few weaknesses to balance it out. He has a very strong offensive game, as the range and speed of his attacks, combined with their long active hitboxes and hitstun duration, gives him great combo-ability with easy followups. He has a good number of kill options which have similarly easy setups, allowing him to score KOs very quickly.

He has an amazing grab and throw game, possessing the longest non-ranged grab in the current demo that is low in start up and ending lag. He is one of the few characters in the game to have good uses for all of his throws, as his forward, down and back throws can chain grab the majority of the cast and his up throw can be followed up with his excellent juggling ability.

He has a good aerial game with the majority of his aerials having long reach and fast start up.

His special moveset is also very versatile: has an effective camping ability with his ability to halt most approaches just by spamming Demon Fang. Tempest is a quick damage racking option that has KO potential at high percentages, Rising Falcon boasts good KO potential and can be charged to deal more knockback, and Tiger Blade, while not the best recovery in terms of distance, is very difficult to punish, since he can immediately cancel it with any other aerial attack to prevent helplessness.

Demon Fang has low priority and can be easily reflected or canceled out by other attacks. Most of his attacks possess hitboxes that do not cover his hurtboxes at all, which makes it difficult for Lloyd to effectively hit his opponent if they are directly on top of him. His recovery is also notoriously weak, as Tiger Blade covers a horrible vertical distance and is very weak in terms of damage, and while his side special, Tempest, can provide him with moderate horizontal recovery, it leaves him helpless in midair if Lloyd doesn't connect with anybody.

The end result is a character with a very strong neutral game, punish game, and adaptability, with a few glass cannon-esque traits that fall drastically short of keeping him balanced. This, coupled with his shallow learning curve, can make him one of the most frustrating characters to fight against.

Lloyd has received nerfs even though he was considered a mid tier character last demo. He mainly has received nerfs to his KO options, his grab & throw game. However, Lloyd is seen as a more effective character this demo due to advances in his metagame. Lloyd also benefits from this demo's lower hitstun which makes him less susceptible to combos while being one of the few characters who can combo like last demo. 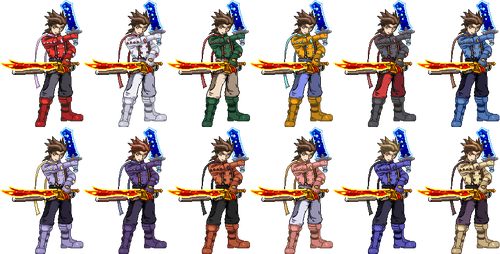 Lloyd using his down smash to attack Bandana Dee and Black Mage on Crateria.

Two Lloyds jumping near Mithos Yggdrasill on Tower of Salvation.

Lloyd getting damaged by Mithos while Kirby starts the Demon Fang animation.

Lloyd taunting on Tower of Salvation.

Lloyd using his down aerial Rising Falcon on Hueco Mundo.

Lloyd fights with Ichigo on Temple.

Winged Lloyd in the SSF2 Beta intro, referencing the ending of Tales of Symphonia where he gets them.