This article is about Link's appearance in Super Smash Flash 2. For general information about the character, see Link.

Link is ranked 11th on the current tier list, four spots lower from the previous tier list, and is now in the B+ tier. Link possesses disjointed range, a highly flexible and effective zoning game, a decent combo game, and a large variety of powerful finishers. He has high survivability due to his above-average weight, high accelerated falling speed, and guard-breaking recovery. Link also possesses a very good edgeguarding game, due to his projectiles and his down tilt, which can meteor smash.

However, due to being a high faller and possessing above average weight, Link is highly vulnerable to combos and chain grabs, nullifying his survivability somewhat. Adding to this problem, his recovery is limited if he loses his midair jump, making it very difficult to return to the stage against an experienced player. Furthermore, his average ground movement and attacking speed is sluggish, making it difficult for him to play up close offensively, allowing faster characters to quickly overwhelm him if they get too close. His projectile game is weakened overall due to the more lenient power shielding mechanics, allowing any character to instantly reflect his arrows and boomerangs back at him before he has time to react.

Link has a small but dedicated player base and some representation in online tournaments, achieving an overall mild success.

As a swordsman, Link holds the advantage of long-reaching, disjointed hitboxes filling out the majority of his moveset, albeit at the cost of longer than average startup and ending animations. Link has many powerful finishing moves, both on the ground and in the air. These include the first hit of his down smash, the second hit of his forward smash, his down aerial, his up aerial, the second hit of hit of forward air and back throw.

Link has a versatile arsenal of projectiles in his special moves, providing him with one of the strongest zoning games among the cast. His Hylian Shield also plays an important role in his control of space, granting him the unique ability to block certain projectiles while standing or crouching without having to use the standard shield.

Link’s mid-heavy weight and being a high faller allows him to survive many powerful hits, both horizontally and vertically. Complimenting his survivability is his aerial Spin Attack, which shields him with wide hitboxes that can discourage edgeguarding attempts and causes only minimal landing lag should he chose to land on stage. He also has the option of snapping to the ledge with his hook shot Z-Air, providing additional recovery mixup options.

Link has a polar grab and throw game. He has the third longest grab, which is a tether grab which leaves him open if missed. His down throw is a good combo starter which can lead into up tilt, up smash and any aerial. Back throw is a great kill option when user near the ledge. Forward throw can allow for certain follow-ups if acted quickly enough.

Link is also a strong edge guarder which is hard to break.

Despite the myriad of advantages they provide, Link’s physics are not purely beneficial. His combination of above average weight and being a high faller makes him the ideal target for long, damaging combos and chain grabs, somewhat negating the advantages brought on by his survivability.

His long range comes at the aforementioned expense of leaving large openings after mistimed attacks, and should he be caught off-stage without his midair jump, he is left with few resources. Link also suffers against characters who possess better mobility or out prioritize or reflect his projectiles, as his ground mobility is average.

Link can be left vulnerable if forced to approach, as many of his best options are significant commitments.

Link has received a mix of buffs and nerfs. His attacks are weaker overall, but he has better mobility, faster projectiles, less startup/endlag on his attacks, and a significantly better recovery. Link also benefits from the lower hitstun of this demo, which makes him less vulnerable to chain grabs and Zero-to-death combos while maintaining his own combo game due to his increased attack speed. The buffs outweigh the nerfs he received and makes him a more effective character. 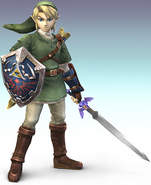 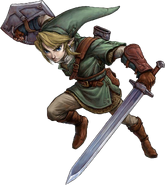 Link's third art, used from v0.6 to v0.8b. Taken from The Legend of Zelda: Twilight Princess, like the previous picture. 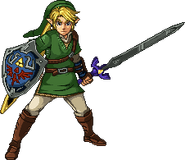 Link taunting next to Zelda, on Smashville.

Link uses his down aerial at Ichigo while laying on the platform, on Dracula's Castle.

Link plays Ocarina from his side taunt, on Clock Town.

Link's design being introduced in v0.9b.