This article is about the removed Assist Trophy. For other uses, see Light.

Light Yagami (夜神), also going by the alias "Kira" (キラ) is the protagonist of the manga and anime series, Death Note. Light originally appeared in Super Smash Flash 2 as an Assist Trophy prior to Beta, in which he was removed due to the developers deeming him overpowered and unable to be made weaker without being made useless, along with the fact that he hailed from a manga and anime series with no other representation in the game.

Light was born on February 28, 1986. He is a third year high school student (12th Grade) at Daikoku Private Academy (大国学園) who also attends supplemental classes at Gamou Prep Academy, in the beginning of the story. Light's father, Soichiro Yagami, who is a member of the investigation team opposing Kira. In addition, Light has a mother, Sachiko Yagami, and a younger sister, Sayu Yagami. In Spring 2004 Light becomes a first-year student (freshman) at To-Oh University (東応大学), becoming one of two freshman representatives; L is the other freshman representative. During a tennis game with L at To-Oh, spectators reveal that Light was the junior high school tennis champion in 1999 and 2000; After his 2000 victory, Light quit tennis as he entered high school.

Light's life is considered "ruined" once he obtained the Death Note, and that Light became a victim of the Death Note "in many ways," Ohba described Light as bearing good faith intentions and having a "very conceited" nature. Ohba also describes Light as having a "warped" "desire to be godlike," bearing love for his family, and intending to transform the world into "a better place." In the Death Note manga volume named, Death Note 13: How to Read; also states that Light, "uncompromising" when achieving his ideals, "sullied" himself by using the Death Note and that his actions "may have been the result of the purity within him" prior to obtaining the Death Note. Douglas Wolk of Salon describes Light as "coldly manipulative," "egomaniacal," and "an unrepentant serial killer, a butcher on an enormous scale" who is not "a Freddy Krueger, a monster who represents pure evil, or a Patrick Bateman, a demonic symbol of his age." Wolk describes Light as "the good guy, more or less" who genuinely believes that he holds "the moral high ground."

Light constantly tries to evade the suspicion of L while both maintaining his identity as "Kira" (the name derived from the Japanese pronunciation of the English word "killer") and cleansing the world of crime. The fact that he is a genius also adds to his notion that only he is fit to judge humanity and steer it on a proper moral course.

Light originally appeared as an Assist Trophy in Super Smash Flash 2. Upon being summoned, he would appear alongside Misa Amane, who would search for an opponent with her Shinigami Eye. Once an opponent was spotted, Light would write their name in the Death Note, proceed to laugh maniacally, and then disappear with Misa. A countdown timer would then appear above the head of the spotted opponent, starting from ten, and once it reached zero, the opponent would be instantly KO'd. This made Light one of the strongest Assist Trophies to appear, and as such, he was also the rarest. Opponents could avoid Light by staying out of Misa's sight, and if no one was spotted then they both would disappear with a disappointed face. However, upon being spotted, it would be impossible for an opponent to avoid being KO'd.

Light and Misa on Hueco Mundo.

Misa searching for opponents, alongside Light.

Misa hopping after finding an opponent on Bomb Factory.

Light writing on the Death Note.

Light laughing after having written an opponent's name on the book.

The countdown timer near Ichigo on Crateria.

Light next to Naruto, Goku, and Ichigo on Final Destination.

Screen capture of Light's old concept at the DOJO!!!.

Light writing in the Death Note. 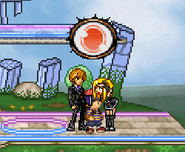 Light with Misa on Battlefield. 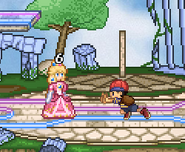 The early countdown timer on Peach. 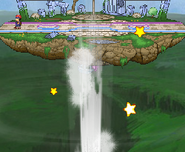 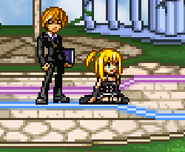 Light and Misa missing their attack.