A ledge, also known as an edge or a cliff, is a platform feature in Super Smash Flash 2 that a character can grab or tether to, usually placed at the ends of a stage's main platform. This location is especially important during edgeguarding and recovery, where a recovering opponent might try to access it, while the edgeguarder can try to use the ledge to edgehog. effectively denying the ledge to the recovering opponent. Some stages have multiple ledges, while others do not have any.

Characters with a tether recovery have a much easier time grabbing the ledge due to the tethers having large sweet spots. Almost every tether has a hitbox to knock opponents off the ledge in order to steal it.

All characters in the air, aside from one, will automatically grab the ledge when close enough to it, but they will ignore it if they are fast falling or if another character is already hanging onto it. Characters also cannot grab ledges while performing an attack, though some do snap to the ledge when close. When a character grabs the ledge, they will gain invincibility for a short duration of time.

Ledge options are a set of actions that characters can perform while hanging on a ledge. These techniques are absent from the first Super Smash Flash, as ledges did not exist in the game and as such, could not be grabbed. Below is a list of ledge options:

Jigglypuff climbing up on the ledge.

Jigglypuff attacking on the ledge.

The ledge sweetspot is the act of grabbing the ledge of a platform with an attack (usually a special move or tether grab) while said special attack is still active.

Players try to sweet spot the ledge when recovering to avoid certain edgeguarding tactics and making guard breaking much easier. Sweet spotting avoids most ground attacks and certain aerials by recovering to low to be hit and if they are hit, ledge teching becomes relatively easier. However, trying to sweetspot the ledge could make players vulnerable to edgehogging. 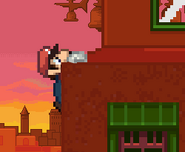 Mario hanging on a ledge on Twilight Town. Link getting back to Battlefield's main platform via climbing up. 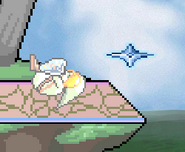 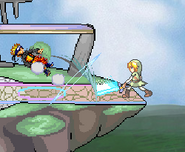 Link hitting Naruto with his ledge attack on Battlefield.