The Landmaster is a land-based vehicle in the Star Fox series that originally appeared in Star Fox 64. It is used instead of the standard Arwing by Fox on certain levels to complete their objectives. The vehicle is able to hover in the air and fire energy blasts, but unlike in SSF2, it cannot hover indefinitely and also has the ability to roll over — known as a barrel roll in this game. Like the Arwing, the Landmaster moves forward at all times in this game; however, this was changed in Star Fox: Assault, where the player is given free range over its movement.

The tank's appearance is based mostly on the futuristic look of its Star Fox: Assault incarnation, but it also shares the traditional tank treads it has in Star Fox 64.

Fox preparing to enter the Landmaster on Meteo Campaigns.

Fox exiting the Landmaster, after its time limit had passed.

Chibi-Robo being hit by the Landmaster's energy blast from Fox on Flat Zone +. 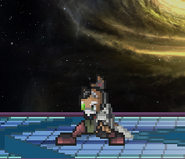 Fox preparing to jump up to get his Landmaster.

The Landmaster running over Mario.