Lakitu, known in Japan as Jugem (ジュゲム), is a bespectacled Koopa enemy hailing from the Mario franchise that rides clouds through the skies, best known for tossing Spiny Eggs that "hatch" into quadruped Koopas called Spinies (トゲゾー).

Lakitus are relatively common enemies in the Mario franchise that first appeared in the original Super Mario Bros., where they fly in their clouds and throw Spiny Eggs that hatch into adult Spinies after landing. Other times, a Lakitu may use a fishing rod instead of throwing Spiny Eggs, or it may appear in a pipe instead of a cloud. Lakitus normally fly high in the sky in their clouds, and their most notable trait is that the cloud they ride on can often be temporarily ridden by Mario or Luigi after being defeated. Although they appear as enemies in most Mario games, they often take on less evil tasks in other games, such as refereeing races, umpiring tennis and baseball games, and even filming Mario's adventures.

Spinies are the quadruped Koopas that hatch from the Spiny Eggs thrown by Lakitus, though they may also appear separately from them. They walk across the ground with their spiked shells facing upward, damaging anyone that jumps onto them, though they can still be defeated using power-ups. Although they do not normally retreat into their shells like Koopa Troopas, their shells may still slide across the ground in the same way when upside-down.

In A Super Mario World

Lakitu appears as an Assist Trophy in Super Smash Flash 2. When summoned, Lakitu soars over opponents and hovers back and forth as he drops Spiny Eggs. Upon reaching the ground, a Spiny Egg turns into a Spiny and starts walking around, dealing 14% damage and weak knockback to opponents on contact. Additionally, opponents hit by a Spiny Egg as one falls are dealt 14% damage and meteor smashed. Spinies are treated as projectiles and therefore can be reflected and, oddly, absorbed. After a certain period of time passes, Lakitu will disappear.

Mario being hit by Spiny on Nintendo 3DS. 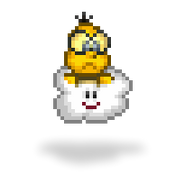 Lakitu's original effect, saving Mario from falling off the stage.

Lakitu raising the flag before leaving the battle.