Before swinging, Bankai Ichigo first holds his Tensa Zangetsu behind him, and then he grows his Hollow mask, transforms to his Vizard form and creates black and red Hollow energy around him. The charge of the move can be stored, and the move has two variants depending on the charge. When uncharged, the energy deals 10% damage to opponents hit and the projectile launched is transparent and negative in color, dealing damage ranging from 3% to 22% with weak knockback. The Hollow mask then fades away. When fully charged, Bankai Ichigo, being controlled by his Inner Hollow, grows half of a Hollow mask and laughs as the energy surrounds him, now dealing 14% damage, and the projectile launched is larger and red and black in color, dealing 34% damage and massive knockback to opponents hit. Bankai Ichigo then rips off the Hollow mask with a shattering noise before his Inner Hollow can do any more damage and regain his awareness.

The main drawback to this attack is that it takes a very long time to charge, as Bankai Ichigo only lasts so long. Bankai Ichigo can also be interrupted with another attack prior to unleashing the projectile, making it easily punishable and predictable. Additionally, when used in the air, Bankai Ichigo will not able to charge the move, instead unleashing the move with the charge already stored. Interestingly, he will also be able to move across the ground after landing, which he cannot do when performing the move on the ground.

In the Bleach franchise, Getsuga Tenshō has several variants, depending on the sword and the user. One of the most powerful variants is Kuroi Getsuga, named this way for its black color. It is an enhanced variant of the attack used by Tensa Zangetsu, which Ichigo has in his Bankai state. The attack can be used in many of the same ways the standard Getsuga Tenshō is used in, only the blasts released are black in color with a red outline and their path can be controlled by the user, with explosively augmented power and speed. Using his Hollow mask, Ichigo can further increase the power of his Bankai enhanced Getsuga Tenshō. Bankai Ichigo is also able to store a Getsuga Tenshō inside his Tensa Zangetsu while fighting, in order to strengthen or alter his sword swings. This technique was not present in SSF2, however.

Bankai Ichigo about to release an uncharged Kuroi Getsuga.

Bankai Ichigo about to release a fully charged Kuroi Getsuga. 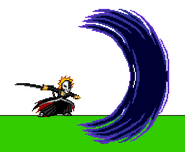 Ichigo about to release the chargeable Kuroi Getsuga. 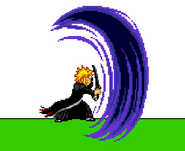 Kirby charging his version of Kuroi Getsuga on Test Stage 1.