Koffing, known in Japan as Dogars (ドガース) is a Poison-type Pokémon that evolves into Weezing starting at level 35. Koffing is a Pokémon that can be released from a Poké Ball in Super Smash Flash 2.

Koffing is a round, purple Pokémon filled to the brim with toxic gases. Several crater-like protrusions on this Pokémon's body give it the resemblance of a naval mine and has a skull and cross-bones below its blissful face. Koffing spews out poisonous gases whenever it gets upset. On the other hand, it exhales fresh, clean gases whenever it becomes happy or overjoyed. Although Koffing's gas is more commonly attributed as being poisonous, the gases may also cause coughs, sniffles, and teary eyes. Koffing has also been known to explode from over inflating its body. Koffing is also capable of launching Fire and Electrical attacks. If Koffing becomes agitated, it raises the toxicity of its internal gases and then jets them out from all over its body. The higher the temperature, the more gas Koffing concocts. Koffing is known to float in the air because its body is filled with a gas that is slightly lighter than air. The gas is a combination of the vapors from fermenting trash and Koffing’s own poisonous fumes. They are a very common sight around burned down buildings, abandoned buildings and power plants. Volcanoes also provide a suitable habitat for them.

As stated above, Koffing is one of the Pokémon that can be released from a Poké Ball in Super Smash Flash 2. Once it is released, Koffing will puff up and hold the air for several seconds. Once it has enough, Koffing uses Smoke Screen in which it emits vision-blocking smoke that covers a middle-sized area and lasts a good amount of time. This smoke can both confuse your foe as well as yourself.

Originally, in the first Super Smash Bros., Koffing's smoke would actually harm opponents. The same happened with Weezing in Super Smash Bros. Melee. For Super Smash Flash 2 this concept was changed in order to further differentiate it from the official games.

The smoke has been effected. 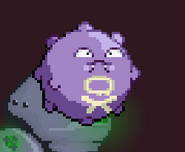 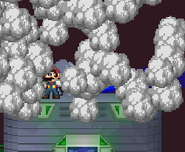 Koffing next to Zelda on Jungle Hijinx.