This article is about Kirby's appearance in Super Smash Flash 2. For general information about the character, see Kirby.

Kirby is currently ranked 17th out of 40 on the tier list, placing him in the B tier; a good leap from his 27th-place position on the last tier list. Kirby has good combo-ability, disjointed range on some attacks, and strong finishers in his smash attacks, Hammer, and back aerial. He also has a strong aerial game, courtesy of his aerial attacks having immense utility, most notably with his back aerial, letting him perform a fence of pain. Due to his low falling speed, five midair jumps, and Final Cutter, he has a very strong, flexible recovery, making him difficult to edgeguard. He is also good at edgeguarding himself, due to his ability to go deep against a cast that tends to have poor recoveries on average, allowing for early gimps.

However, Kirby suffers from an abysmal neutral game, floatiness, and poor range, greatly limiting his approach options. He also puts too great of an emphasis on hard reads for getting KOs because of his inability to reliably combo into his primary finishers. Combined with his light weight and his aforementioned floatiness, he tends to get KO'd a lot faster than his opponent, although his slow falling speed means he is less vulnerable to aerial combos. His defensive options are very punishable, as many of his defensive moves lack invincibility frames and his out of shield options are severely limited.

Kirby's representation in online tournaments was initially fairly strong in the early meta, but he gradually dropped off the map as his weaknesses became more apparent.

Kirby is best described as a beginner friendly puffball. Kirby's main attributes include a slow falling speed, 5 mid-air jumps for vertical recovery, and easy to use specials (without complicated inputs like Ryu or precise angling requirements like Pit's arrows and up special or Lucario's recovery.) Despite its seemingly basic moveset, Kirby also has great potential for mindgames.

Kirby's moveset is straightforward to use. All his inputs have simple button combinations and generally have logically placed movements (down and side tilts pushes forward, hammer knocks opponents forward, down aerial pushes characters downward, etc.) Some notable exceptions include his down special, Stone, which knocks opponents upward, and his up special, which goes up, then down, knocking down opponents that are in the path of the sword. Regardless of these exceptions, his moveset is generally straightforward for beginners to use.

Kirby has a good air game, possessing good range in the majority of his aerials (especially his forward and back aerials). They also have good combo potential. He has a good ground game with good tilts and good reach in his attacks. He has a good edge guarding game due to his good aerials, having five midair jumps which allows him to safely gimp his opponent while being able to recover back to the stage and is able to perform a fence of pain with his back aerial.

Kirby has reliable finishers in his forward smash, up smash, down smash (semi-spikes the opponent if they connect with his feet), Hammer and a fresh back aerial.

Perhaps one of Kirby's most noticeable traits is his recovery. Due to possessing five midair jumps, slow falling speed, good vertical mobility, and a decent vertical recovery option in Final Cutter, Kirby has one of the best recoveries in the game. This makes it great for beginners since it allows them to recover from the stage easily with significantly less risk of self-destructing off stage.

Additionally, when his recovery is combined with his aerials (most with decent reach), smash attacks, tilts, swallow, hammer, and suicide throws, Kirby is one of the best edgeguarders in the game. Recovering against Kirby is difficult due to his range of options. Combined with his low falling speed and multiple mid-air jumps, Kirby is one of the easiest characters to learn how to edgeguard. He is a good choice for players who wish to learn and practice how to edgeguard off-stage.

Despite Kirby's beginner-friendly appearance, Kirby has lots of attributes that can favour intermediate and advanced players. His aforementioned edgeguarding ability one of these attributes. Another key attribute is that his moveset is great for mindgames in matches. His five mid-air jumps allow him to air camp, setting up situations where Kirby can bait opponents in the air. Kirby can react by either air dodging and counter with an attack, or position the opponent in a tricky situation. Additionally, all his special moves can be used as surprise moves or as mindgames against the opponent. His final cutter can be used for planking safely on the ledge, as the sword has disjointed hitboxes. It can also be used as a suicide KO move off-stage when timed correctly. His stone (down special) is a risky move with noticeable startup and ending lag, but it can be used as both a surprise KO move and a stall-and-fall option to mix his recovery or confuse the opponent. His hammer has low startup and end lag with KO potential, effectively making it like as if Kirby has a 6th aerial attack. His hammer is really useful for setting up unexpected KO moves or scaring the opponent during an edgeguarding situation. Kirby's swallow is both a great edgeguarding move with the option of performing a Kirbycide, a stall-then-fall move, and an on-stage move for both comboes and mindgames. Unusually for a grab though, swallowing and spitting opponents does not put the opponent in hitstun.

Kirby however, has some major weaknesses. In high level play, Kirby gets bullied by much of the cast due to either his relatively short range, light weight, low falling speed, low air acceleration, low ground speed, lack of a reliable projectile, or a combination of these attributes. Firstly, his light weight and very low accelerated falling speed makes it easy for opponents to KO Kirby very easy both vertically and horizontally. Kirby also has poor momentum cancelling, which makes this problem even worse. Kirby has poor mobility with a slow dashing, walking, and air speed which allows him to be rushed down by faster characters. His poor mobility weakness is further exacerbated by the fact that most of the cast has very little to no air deceleration, and can thus manually increase their air speed beyond their recovery air speed simply by dashing first, then jumping while dashing. This greatly hinders Kirby's ability to air camp. He lacks a reliable projectile as the shockwave produced from Final Cutter is easy to avoid and out-prioritize. He lacks reliable ways to deal with projectiles which, when combined with his poor mobility, creates problems approaching characters with good projectiles. Kirby also has problems dealing with characters who out range him, such as Ichigo and Marth.

Overall, Kirby is a beginner-friendly character that is fun to use for casual play and to learn how to play the game. In more serious settings, Kirby struggles against characters who possess great speed (e.g. Captain Falcon, Pikachu, Sonic), great disjointed range (e.g. Marth, Ichigo, Lloyd), strong KO moves (e.g. Donkey Kong, Ichigo) or strong projectile camping abilities (e.g. Link, Falco, Simon). Unfortunately, top and high tier characters possess one of, or a combination of these attributes, causing Kirby to struggle in high level play. Serious Kirby players must learn all of Kirby's strengths and tricks with his moveset and possess a strong mental game in order to win very tough matches.

Kirby has received little changes from last demo. Kirby appears to benefit and is hindered by the low hitstun of the demo. Kirby is much harder to combo than last demo, but he has a harder time combo'ing than he did last demo along with less follow ups out of grabs. This has made Kirby appear to be seen as a less effective character. 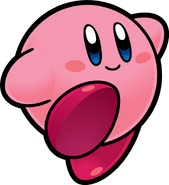 Kirby's first art, used in the character selection screen from v0.6 to v0.7 and in-game from v0.5a to v0.5b. Taken from Kirby Super Star Ultra. 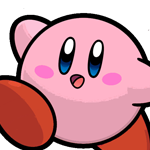 Kirby's second artwork. Used from v0.9a to v0.9b.
Add a photo to this gallery

Kirby and Jigglypuff taunting on The World That Never Was.

Kirby uses Hammer while Wario about to uses his forward tilt on Mushroom Kingdom III.

Ball version.
Add a photo to this gallery

Kirby using Inhale to suck in Mario on Dream Land.

Kirby using one of his midair jumps on Dream Land.

Kirby taunting while Captain Falcon and Fox perform a forward aerial and a back aerial respectively on Battlefield.

Kirby hitting Bandana Dee with his forward smash on Rainbow Route.
Add a photo to this gallery

Kirby's current design used from Beta 1.2 onwards.
Add a photo to this gallery

Kirby's congratulations screen on All-Star mode.
Add a photo to this gallery

Retrieved from "https://mcleodgaming.fandom.com/wiki/Kirby_(Super_Smash_Flash_2)?oldid=171331"
Community content is available under CC-BY-SA unless otherwise noted.