When performed, Goku cups his hands to his side and concentrates his ki energy into a single ball-shaped point between them. Holding the special input charges the energy, and when the special button is released, he then thrusts his hands forward to shoot it out in a streaming beam of energy, while uttering "HAAAAAAA!".

Kamehameha goes through four states of charge, with Goku uttering "KA", "ME", "HA", "ME" for each one, respectively; the ball grows in size amid flashes with energy, along with emitting a sound cue, for each charge, with the fourth stage being the brightest and largest. With each ascending charge, the beam becomes larger, travels farther, and deals more damage and knockback to opponents hit. At its lowest charge, the beam is weak and travels very little range, but at full charge, it is much more powerful and travels a great distance.

When being used in midair, the move dramatically slows Goku's descent while charging, pushes him back on release (with higher charges pushing him back more), and he can launch it backwards as well. The backwards-thrown version is called a Reverse Kamehameha, and behaves exactly the same as a normal Kamehameha.

Kaiō-ken Goku's version of the move is called Kaiō-ken Kamehameha (・). While visually identical to his normal version's self, it charges twice as quickly and boasts much higher power. Also, unlike the regular version, it can be turned in the other direction when used either on the ground or in midair. Like all of Kaiō-ken Goku's attacks, using or charging it prevents Kaiō-ken from ending until after the move ends, allowing the player to remain in Kaiō-ken form indefinitely by continuing to charge it.

The Kamehameha is Goku's signature move in the Dragon Ball franchise. It is the first Ki-based attack to be introduced in the franchise and continues to be the most commonly used, due to being not only iconic but also simple and practical. Master Roshi invented the technique, but took 50 years to develop it. Goku was not taught the move directly, but first learns it upon seeing Master Roshi perform it once in order to put out the fire on a burning mountain.

Even in the earliest points of the series, long before large-scale destruction was a common occurrence, its destructive power and reach were supernatural in magnitude. Along with destroying the aforementioned mountain, it was also used to destroy the Moon to stop Goku, rampaging as a Great Ape, from destroying the World Tournament.

Being such a common attack, it was natural for variations to spring up as the series went on. Out of the variants that appear in Super Smash Flash 2, the Feet Kamehameha, seen in his down aerial, is first used by Goku against Piccolo, the Reverse Kamehameha was first used by Master Roshi (disguised as "Jackie Chun") against Goku, and the Kaiō-ken Kamehameha was used notably against Vegeta IV and Frieza. All variants tend to appear as separate attacks from each other in the video game adaptations. 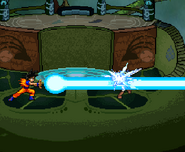 Goku holding a fully-charged Kamehameha, on its second design.

Goku attacking Fox with the Reverse Kamehameha, on Battlefield.