McLeodGaming Wiki
Register
Don't have an account?
Sign In
Advertisement
in: Articles in need of cleanup, Attacks, Special moves,
and 4 more

When performed, Goku lets out a blue ki aura around himself, and any opponent or other hurtbox that comes in contact with it will have Goku activate the move and take 3% damage. Once activated, Goku temporarily transforms into his Kaiō-ken form, in which he is tinted with a crimson tone and his moveset is changed.

While in his Kaiō-ken form, most of Goku's moves are stronger and faster versions of his moves from his base form. For example, his Kamehameha becomes Kaiō-ken Kamehameha, which charges twice as fast and is more powerful overall. His smash attacks are also more powerful and cannot be charged. Many of his moves also have different properties, and others are changed entirely. The most notable of these is his side special move, which changes from Ki Blasts to Kaiō-ken Attack, in which Goku dashes forward while surrounded by energy. Despite these strengths, Goku takes 1% recoil damage every fourth of a second in this form, and he does not gain any kind of knockback resistance. Additionally, Goku must continuously land attacks on opponents to maintain this form, as it will end if he does not attack any opponents for a certain period of time.

Kaiō-ken Goku's own version of the down special move releases red ki aura around him that deals 5% damage to opponents hit, but it cannot be held.

Kaiō-ken is a technique in the Dragon Ball franchise created by North Kaio and is one of two techniques he taught to Goku, the other being Genki Dama, when he trained in the other world. As a result of the Kaiō-ken, Goku's strength, speed, and base ki level are multiplied for an instant, and he later learns to increase the effect of the Kaiō-ken to higher multiplications. When Goku first mastered the technique, the furthest he could handle was the Kaiō-ken x4, but through training in gravity 100 times more powerful than Earth's, as well as a dramatic strength increase after his fight with Captain Ginyu, he was able to withstand astounding multiplications of the Kaiō-ken attack, such as Kaiō-ken x20.

Despite Kaiō-ken's power, Goku is not able to hold the transformation for too long and may suffer from severe painful muscle convulsion afterwards, which is referenced in SSF2 through the consistent damage Goku takes over time while in this form. If the user multiplies their base ki too much, the uprise of ki could easily obliterate them, or severely damage their body. After becoming Super Saiyan, Goku discontinued using Kaiō-ken, as the Super Saiyan transformation largely overshadows it, and combining the transformations would be far too overwhelming on his body. However, this changed in the Dragon Ball Super anime, when Goku combined the Kaiō-ken with his Super Saiyan Blue, allowing him to use Kaiō-Ken while transformed and not endanger his life as a result of the huge amount of energy loss.

The attack's ability to damage opponents who touch Goku may be a reference to various Dragon Ball video games, where the opponent would be blown back or take damage if a player character transforms into another form while close-by. The Dragon Ball Z: Budokai series mirrors how the attack works in SSF2 most notably, as Goku also had a Kaiō-ken transformation. However, no Dragon Ball game requires the player to "hit" an opponent to transform. 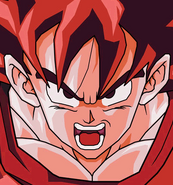 Goku releasing his energy to use the King Kai Fist. 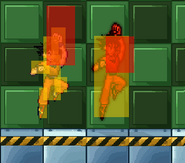 A side-by-side comparison of the hitboxes of Goku's up smash in base form and Kaiō-ken.