The stage is very simplistic on its design. It contains one main platform with a small rocky-plateau on the left and a  pass-through hill in the right, which is connected by a small slope. A Barrel Cannon is located on the left side of the stage. Players can hop into the barrel by coming into contact with it, and pressing a button or waiting long enough will shoot the character out of the barrel in whatever direction it is pointing, sending them reeling. Depending on the perspective, this can prove to be both a nuisance and an advantage, as the Barrel may hinder KOing an opponent but increase the player's survivability in turn. It should be noted that only one player can be inside the barrel. Other players that attempt to get inside while it is occupied will simply go through it.

The background includes Donkey Kong's treehouse beside palm trees and gourds, and the silhouettes of some Mini-Neckies can be seen flying in the sunset.

This stage is currently banned in tournament play. The position underneath the floating platform is a powerful camping spot, while the slope in the center of the stage has a tendency to create buggy collision interactions. While these faults are not normally enough to ban this stage, the backroom have decided that the stage layout is too similar to Castle Siege, but more unbalanced, thus prompting its exclusion from the current stage list.

Jungle Hijinx is highly influenced by the Donkey Kong Country level of the same name. However, despite this the stage is actually based on the many jungle levels from Donkey Kong Country. This is because the level Jungle Hijinx is not set in a sunset, but instead a cloudy sky. The actual level that is set in a sunset is another jungle level known as Orang-Utan Gang. Additionally, the Barrel Cannon is not present in Jungle Hijinx, but in subsequent levels; not just in jungle levels. The rest of the background, with one exception (Mini-Neckies appeared in other levels) originally appeared in the Jungle Hijinx level. DK's treehouse was the place where the player started the quest while the Rambi's crate could be opened to ride the Animal Buddy.

Luffy taunting on the stage.

Wario taunting on the stage.

Donkey Kong and his treehouse. 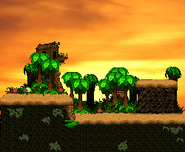 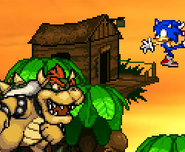 Bowser on the stage as Sonic flies. 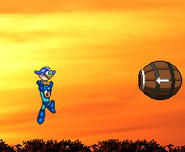 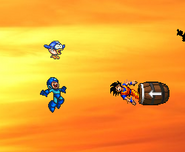 Mega Man's Beat Call ending as Goku is fired out of the barrel cannon. 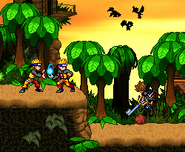 Goku and Link standing while Tails uses his up smash (pointing at Rambi's crate) and Sonic taunts.

Peach floating next to the barrel cannon.

The player after being sucked into the barrel cannon.

Peach blasting off from the barrel cannon while Mega Man taunts on the left side.

Link inside of a barrel cannon.

Link being shot out of the barrel cannon while Donkey Kong charges up his Giant Punch.