Jack Skellington is the protagonist of the 1992 stop-motion film, The Nightmare Before Christmas. Jack also makes appearances in the KINGDOM HEARTS series, thus, Jack was planned to be a Battle Card in Super Smash Flash 2, but was cut along with the others in the April 14th, 2012 update of the Smash Flash DOJO!!!.

Jack is a large thin skeleton that wears a black tuxedo-like with white stripes and a big bow that matches his outfit. He is the leader of Halloween Town and is the responsible for organizing every annual Halloween celebration in the town, thus, he is merely crowned as The Pumpkin King; however, he is not in charge of the mayor.

Jack is shown to be incredibly eccentric, always alive and active. He is somewhat of an optimist; when he puts his mind to something he will not stop until he achieves it, something that is seen when he organizes the Halloween celebrations. He tends to be slightly oblivious, and never thinks things through, which usually leads to disaster. But he is an overall cheerful, eccentric, character who is greatly respected by all the folks in Halloween Town.

Jack was confirmed in October 31, 2010 in the Smash Flash DOJO!!! as a Halloween bonus update, using sprites from KINGDOM HEARTS: Chain of Memories. Jack is the second character shown, with Genie being the first; that can be summoned by Battle Cards. Unlike Genie, he is notably the first character of Battle Cards to have his own page update, but was cut from the game.

When Jack is called into the battlefield, he will fill the whole screen with "jack-o-lantern" pumpkins that stuns opponents, then, he unleashes a rampage of thunders that damage the opponents. According to the SSF2 dev, Steven, Jack does not use the Thunder spell from the KINGDOM HEARTS series, rather a machine created by Dr. Finklestein known as the 'Terrific Thunder-o-matic'. This is because the creator the The Nightmare Before Christmas, Tim Burton, stated that there is no magic in Halloween Town. 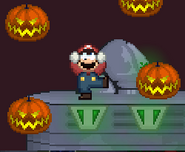 The pumpkins covering the screen, stunning Mario in the process. 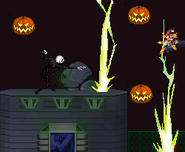