This article is about Isaac's appearance in Super Smash Flash 2. For general information about the character, see Isaac.

Isaac is a newcomer starter character in Super Smash Flash 2. He was revealed on the McLeodGaming Direct stream on July 21, 2014. He was also seen and playable by fans at APEX 2015. His sprites are custom-made and based on his Assist Trophy appearance in Super Smash Bros. Brawl and Super Smash Bros. Ultimate, but with a completely custom moveset. He is voiced by Darcy Maguire-Wheelahan, being the only playable characater who has a custom voice actor.

Isaac is ranked 9th on the current tier list, a large rise from the 32nd place in the previous tier list. Thanks to his sword and his powers, Isaac possesses great disjointed range in several of his attacks, like his forward tilt or his neutral special, which keeps the opponent in place. He also has strong KO moves in his smash attacks, forward aerial, back aerial and up aerial, a good punish game, and several offensive and defensive mix-ups with down tilt's long-lasting hitbox or using Move or Gaia, which are useful to get out of a disadvantage state.

However, Isaac's movement speed is average and has issues in approaching fast opponents like Captain Falcon. He also has poor frame data in his moveset, as seen in his long-ranged attacks, and despite his good options to get out of a disadvantage state, he is vulnerable to combos due to him being tall and quite heavy and falling rather quickly. His recovery move, Scoop, while long-distanced, is also quite linear without Move and has a hitbox only on the hand below him, giving him poor coverage during his recovery.

Isaac is a very unique character compared to the rest of the roster. He can punish very well with his standard special and smash attacks (with down smash being his quickest) and his down tilt has a lasting hitbox leading to various mix-up opportunities. Isaac is also very good in the neutral with his side special move and forward tilt. His aerial attacks combo very well into each other, making him very deadly at close to mid range.

Isaac also has a very solid grab, with great range and moderate ending lag. Isaac can chain-grab with his down throw, forcing his opponents to rely on DI mixups to escape. His up throw, down throw and up tilt are great combo starters (down throw being the more reliable of the two), and his forward throw and back throw are mainly there to keep people off the stage.

Isaac is also complimented by a great grab range, making it easy to get his chain-grabs and start combos. He can also box aggressive players out by throwing out his lasting hitboxes. He is also very hard to juggle due to downwards side special and Gaia being tough to avoid.

However, he does have his weaknesses. He is not hard to combo due to being a tall mid-weight. His recovery is also very easy to exploit, making him rely on side special mix-ups in order to get back on stage. Some of his moves, notably his up smash, forward smash and neutral special have considerable lag and should be used with caution. Lastly, due to his relatively slow speed he is easy to camp out, giving him poor matchups against characters like Mega Man, Link, and Samus.

Isaac placed 9th on the first tier list of beta, making him a strong top-tier. However, after his various nerfs, as well as the changes to the metagame, his playerbase has been getting smaller and smaller. As of now, he is ranked 32nd in the C tier.

Isaac taunting while Link, Lloyd, and Zelda are standing on Dream Land.

Isaac using his forward smash at Black Mage while dodging on Twilight Town.

Isaac using his down tilt at Sonic on Green Hill Zone.

Isaac being thrown by Peach on Final Destination. 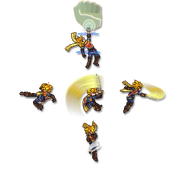