This article is about Ichigo's appearance in Super Smash Flash 2. For general information about the character, see Ichigo Kurosaki.

Ichigo is a newcomer starter character in Super Smash Flash 2. He was one of the first four playable characters, along with Mario, Kirby, and Lloyd, confirmed in a trailer and demo. He is also the only playable representative of the Bleach franchise.

Ichigo is currently ranked 12th on the tier list, placing him in the B+ tier. This is a significant drop from his 5th-place position in A tier on the last tier list. Ichigo has a disjointed hitbox, strong air game, and powerful finishers in his forward smash, up smash, up aerial, back aerial, neutral aerial, and down aerial. He has a good mobility option in his pseudo wavedash which gives him a good approach option. This, along with his small short hop and his fast falling speed allows him to perform SHFFL aerials to approach.

However, Ichigo's recovery is only mediocre at best. His side special move covers a long horizontal distance, but requires a long period of charging, during which Ichigo will continue to fall, which limits its use offstage. His up special move, while difficult to edgeguard on its own, covers very little horizontal and vertical range, making it one of the worst recovery moves in the game. As a result of his recovery problems and his high falling speed, he has no offstage game, and is vulnerable to meteor smash gimps even at 0%. His falling speed also makes him susceptible to chain grabs and combos. His finishers, though very powerful, are also very slow, which makes Ichigo over-reliant on hard reads and mindgames to finish characters off. He also has momentum issues, as it is very difficult for him to regain stage control once lost, especially against faster, camp-heavy characters.

Despite his placing, Ichigo has a strong player base and has solid representation in online tournaments, though his results are somewhat lackluster even in smaller events.

Ichigo can be described as a swordfighter who focuses on speed and power in his attacks. Most of his attacks, namely his forward smash, up smash, neutral aerial, back aerial, up aerial, and down aerial are powerful finishing moves, giving him a wide array of KO options. This is further supplemented by his sword attack's long reach, as his neutral aerial, forward tilt, and down tilt are excellent tools for spacing, while attacks like his up tilt can be used as combo starters. His aerial game is also quite impressive; all of his aerial attacks are very quick for their power, and Ichigo can easily use them for extending combos or finishing off opponents, and because or his high air speed, he boasts a formidable edgeguarding game as well.

His special moveset can also be very reliable in certain situations: Getsuga Tenshō, his neutral special and only projectile, can be used as a way to disrupt approaches, especially aggressive ones, allowing Ichigo to gain the upper hand if he is feeling pressured. His side special, Engetsuzan, is very quick, and as players cannot see Ichigo as he uses the move, it can function as a surprise attack. Gazan, his down special, can function as a dodge-and-punish move, as he can disrupt opponents who try to hit him with a powerful attack, or he can use it as a last-ditch effort to KO opponents offstage by way of a Sacrificial KO. Finally, his up special, Kōtei-ki Tōshin, is very quick, the grounded version has a windbox that pulls opponents into the hitbox, and it protects him from gimps as the hitbox is above him when he uses it in midair.

His grab and throw game is also very useful, as he possesses the eleventh longest grab in the current demo. With down throw, he can set up tech chases, perform chain grabs, start combos, and use it as a guaranteed set up into his finishers or a strong meteor smash off the stage. In fact, the throw itself can be used at the ledge for a very strong meteor smash after chaingrabbing. Up throw, at low percents, can followed up with an up air if the player is quick enough. However, it has little hitstun, allowing most opponents to escape it easily. Forward throw can be followed up with a forward air or a dash attack, depending on the opponents accelerated falling speed and directional influence, but the throw also has little hitstun. Back throw can be used to set up edge guards.

However, Ichigo's main issue is his relatively slow mobility; despite most of his ground attacks being very quick, Ichigo's ground mobility is average at best, allowing faster characters to escape his attacks easily. Additionally, his main grounded KO moves, namely his forward smash, suffers from high endlag and startup, forcing him to rely on reads and mindgames to land these moves, while any ground attack that uses Flash Step leaves Ichigo open if these attacks are whiffed. Adding on to this, Ichigo's below-average weight and his status as a high faller leave him very susceptible to combos and chaingrabs himself.

His neutral game is not as impressive either. Outside of Ichigo's aerials, his only approach options are his dash attack, Engetsuzan, down tilt and his pseudo wave dash in the form of his forward aerial. Dash attack and Engetsuzan cover good range while also being able to out-prioritize certain projectiles and attacks, which allows Ichigo to shut down other characters neutrals. However, the two options are not safe on shield, which can lead to him being punished if these moves are shielded, while higher priority attacks can knock Ichigo out of said moves entirely. This forces Ichigo to time his approach options accordingly to what the opponent is doing, as one misstep could very well end up costing him the battle.

His special moveset can also be rendered moot if used in the wrong situation; despite Getsuga being able to disrupt approaches, and has the ability to be charged, it moves slower and deals less knockback the higher its charge is, so it is very ineffective for KOing. Engestuzan, if charged for too long, can miss opponents, and due to its high endlag, it leaves Ichigo wide open for punishment. Additionally, while it covers a good horizontal distance, it has to be charged in order to achieve this distance, and it increases Ichigo's falling speed and leaves him helpless if it is charged and used in midair, making it risky to use for recovering. Gazan, if not used high in the air, is very weak on its own, making its only use when grounded as a combo starter. Finally, despite Kōtei-ki Tōshin protecting Ichigo from characters who try to gimp him, it covers very little vertical and horizontal distance, and combined with his falling speed, it is hard for him to recover offstage. Additionally, disjointed attacks are able to hit through the hitbox of the move, rendering the move's protection unreliable at best.

Overall, Ichigo is a fighter who focuses on attack power, though he suffers from below-average ground mobility and the predictability of his moveset being very high.

Ichigo has received buffs in that his mobility has improved, his attacks have a longer duration, and he can combo a lot better.

Ichigo first art in the DOJO!!!. 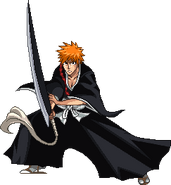 Ichigo taunting as Kirby is about to use Mach Tornado on Dracula's Castle.

Ichigo taunting at Marth, who has been stunned on Castle Siege.

Ichigo and Kirby with their Zangetsus on Hueco Mundo.

Ichigo demonstrating his use of Flash Step across his moveset.

Ichigo using his down smash on Hueco Mundo.

Ichigo attacking Lloyd with his up smash on Hueco Mundo.