When performed, Sonic spins into a ball, hovers in the air, rises slowly, and then homes in on the nearest opponent within a specific range when the special button is released, flying toward them and pulls off various tricks when the nearest opponents are hit. Opponents hit are dealt 8% damage and decent knockback, and the move can be used consecutively after landing another Homing Attack. Sonic's Homing Attack can be charged to increase accuracy and sends him in a downward arc. This move can also be used as a recovery or to counterattack edgeguarders.

When performed, Super Sonic curls into a ball and hurls himself at his closest opponent. Compared to Sonic's version, this move is somewhat inconsistent, only homing in on opponents some of the time. After it hits the first time, though, the move will always home on an opponent, regardless of their distance.

It should be noted the move has very little lag, and opponents hit by the attack experience an enormous freeze frame period, 29% damage and immense knockback. Unlike Sonic's version of the move, Super Sonic's Homing Attack cannot be charged. The move was removed when Super Sonic became a transformation Final Smash in the Beta version.

The Homing Attack first appeared in Sonic Adventure (though a precursor was seen in Sonic 3D Blast called the Blast Attack) and, as its name implies, it allows the user to home in on a nearby enemy with a midair spin attack. The attack's force from bouncing off targets can be chained to attack several enemies which can be use to traverse certain sections of a stage which are otherwise inaccessible. Since Sonic Adventure, the Homing Attack has been a staple move in the Sonic games.

Sonic about to hit Jigglypuff with Homing Attack in the air.

Sonic hitting on the ground on Sky Sanctuary Zone. 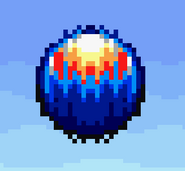 The impact of Sonic hitting Samus.