Hitmonlee, known in Japan as Sawamular (サワムラー), is a Fighting-type Pokémon that was introduced in Generation I of the Pokémon games. It evolves from Tyrogue starting at level 20 when Tyrogue's Attack stats are higher than its Defense. In Super Smash Flash 2, Hitmonlee appears as one of the many Pokémon that can be released from a Poké Ball to aid the player.

Hitmonlee is a brown colored, human and egg-shaped Pokémon. It has three-fingered hands and three claw-like toes. Hitmonlee has segmented, cream-colored arms and legs. The muscles on its legs are more accurate than its arms allowing it to perform powerful knee attacks and kicks. Hitmonlee has almond-shaped eyes with black rings around them, and its feet have yellow coloration on their ankles and soles. Hitmonlee also appears to lack a nose and mouth.

Hitmonlee possesses a considerable sense of balance, enabling it to kick in succession from any position. When kicking, the sole of its foot turns as hard as a diamond on impact. Hitmonlee knows several kick-based moves, including the rarely seen Blaze Kick. Its leg muscles have the special ability to freely stretch and compress. Hitmonlee also has a few mental-based moves such as Meditate and Mind Reader. As with other Fighting-type Pokémon, Hitmonlee is capable of a few Rock-type moves and Earthquake.

Hitmonlee above Isaac on Lake of Rage. 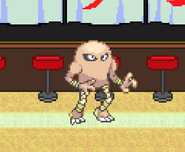 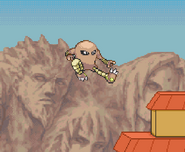 Hitmonlee high jumping into the air. 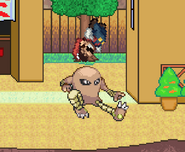 Hitmonlee being summoned by Donkey Kong on Yoshi's Story.