McLeodGaming Wiki
Register
Don't have an account?
Sign In
Advertisement
in: Outdated articles, Incomplete articles, Articles in need of images,
and 8 more

Hitboxes are the main structure for how attacks are executed in the Super Smash Flash series, representing areas in which an attack can hit an opponent. For example, when a character uses a slashing attack, the hitbox is focused around the area where the weapon slashes. Attacks with longer range have a hitbox that extends farther.

They are normally hidden, but can be made visible by modifying the game's files.

Disjointed hitboxes are attack boxes that are not attached to the normal hitboxes of characters. These types of hitboxes can hit projectiles and other attacks without risking damage to the player. These hitboxes tend to be found on weapons, such as swords. Some of them are long, giving more range to the character's attacks.

Interpolation is the action of giving some parts of a frame hitboxes when they would not normally have them. This can make the colliding hitboxes more accurate. It can be used in the blur of swords or in parts beyond a character's limbs.

Captain Falcon performing his back aerial. 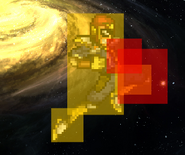 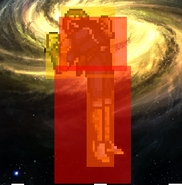 Captain Falcon performing his down aerial.

Bomberman performing his down aerial.

The second hitbox of Bomberman's down aerial.

A demonstration of the different effects of Kōtei-ki Tōshin's wind box on different characters. Fast-fallers, like Fox are merely slowed down. Slow-falling characters, like Jigglypuff are pushed away.