Hammer Bros. (ハンマーブロス), also pronounced Hammer Brothers and stylized as Hammer Bro for individual units, are a species of Koopa that stand upright and throw hammers at passing bystanders. A single Hammer Bro appears as an Assist Trophy in Super Smash Flash 2.

Hammer Bros. have been around since their debut in Super Mario Bros., where, true to their name, are found in pairs ready to throw hammers at the player, jumping at certain intervals between the platforms they are commonly patrolling. They have bigger shells than normal Koopas and wear headgear but they otherwise cannot be knocked inside their shells, unlike other Koopas. Without a Fire Flower, Hammer Bros. are among the most persistent enemies to defeat in the game as their unpredictable nature makes them hard to stomp, relying on jumping over them and avoiding them altogether or pumping the block underneath them. Hammer Bros. have many times been described as the most elite fighters in Bowser's Koopa Troop. These enemies were originally designed by Kazuaki Morita. Beginning with Super Mario Bros. 3, other Hammer Bros. variants came to light, like the Boomerang Bros., the Fire Bros., or the Ice Bros.. Hammer Bros. also have playable appearances in several Mario spin-offs, particularly in the Mario Strikers and Mario Baseball series.

A Hammer Bro can be released from an Assist Trophy in Super Smash Flash 2, and it is among the most common summons in the game. Similarly to its original behavior from its source Mario games and the Assist Trophy in Super Smash Bros. Brawl, it attacks by launching hammers at the opposing players, occasionally jumping while throwing more hammers, increasing the their launch distance. The hammers deal 9% of damage with high knockback. It throws sixteen hammers before disappearing. 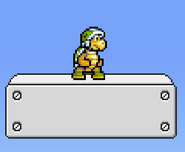 Hammer Bro as he was meant to appear on Mushroom Kingdom III. 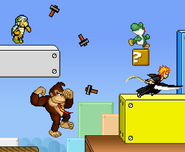