Some of Mario's ground attacks.

There are thirteen ground attacks, achieved by pressing the attack button in any four directions or no direction at all while on the ground. Some attacks, in order to be performed, depend on how closely together the attack and the directional inputs are pressed. 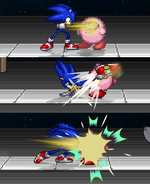 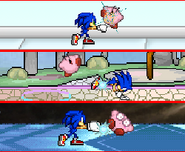