Green Hill Zone (グリーンヒルゾーン) is a starter stage in Super Smash Flash 2 that comes from the first game in the Sonic franchise, Sonic the Hedgehog. It is a sprite rendition of the same stage from the official Super Smash Bros. games.

The stage consists of a large foreground stretching to the left and right blast lines with a wooden bridge to the left and a large curved depression in the middle. A blue lamppost will occasionally rise from the ground, and attacking it will turn it red and make it spin to damage any opponents that make contact with it. The center of the stage can also be attacked, and attacking it enough will cause it to crumble. The background consists of a giant shuttle loop with a 1-Up video monitor above it, as well as various other parts of the Green Hill Zone in Sonic the Hedgehog.

This stage is banned in tournament play. Both sides have walk-off edges and there is no lower boundary. In addition it contains steep slopes.

Green Hill Zone is the first zone (stage) in Sonic the Hedgehog. The shuttle loop in the background is a famous part of the Sonic series, so much that it has become a recurrent element in subsequent games in the series. The stage is also very similar to its appearance in Sonic Adventure 2, with its 3D appearance. The lamppost acts as a checkpoint mark and it could be activated by merely touching it, also, it was never intended to be hazardous unlike how they behave in the stage: one character has to attack it in order to activate and becomes an damaging trap for passing opponents. There are prominent protruding cliffhangers that if someone is to jump out of one of them, the cliffhanger would crumble down. This is similar on how the center of the stage can crumble down. On top of the loop there is an item box that represents an extra life in the Sonic series. 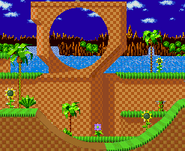 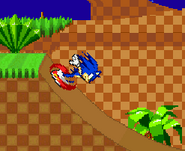 Sonic running on the stage. 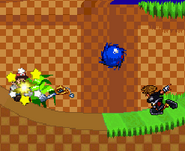 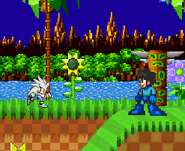 Silver the Hedgehog running on the background of the stage. Note not in the actual game.

Cream the Rabbit running the loop on the background of the stage.

Tails in the side of the lamppost, that already got hit. Notice the absence of the stage's center.

Sonic landing on the ground while Mario falls down the sinkhole hazard, while using his neutral aerial.