A grab is the action in Super Smash Flash 2 of holding an opponent for a limited amount of time. The particularity of grab attacks is that they go through shields and beat any type of armor. Every character has a regular grab, while some characters also have unique grabs called special grabs or command grabs.

Performed by pressing the grab button or by shielding and pressing the attack button, regular grab is one of the basic moves each character has. When an opponent is grabbed, the grabbing character has the option to either pummel or throw the opponent.

Grabs can easy lead to follow ups at lower percents, either through chain grabbing or some throws having low base knockback to set up for other attacks. At higher percents, a grab can mean an easy KO for some characters with strong throws, such as Ness and Donkey Kong.

The maximum amount of time the opponent is held depends on the percentage they are, with higher percent equating to more time. The opponent can also mash out of a grab by pressing any button, effectively reducing the grab time with each press. A grab release will occur if the grab time runs out.

A slight variation of the regular grab is called dash grab, which is simply performed by cancelling a dash with a grab. The character will slide a bit along with anyone who is caught. The distance of the slide is dependent on each characters dashing speed.

Jump-cancelled grab is a similar technique, performed by jumping and cancelling the jumpsquat frames with a grab. It can be used in conjunction with one's dash to make the character slide slightly further than with a dash grab.

All these techniques are essential to perform some chain grabs.

Tether grabs are aerial attacks that can be only performed by Link and Samus, by pressing the grab button midair. On contact with an opponent, they will deal damage and knockback, instead of grabbing them. They can be used to grab a stage's ledges, however.

Special grabs or command grabs are special moves that function like grabs, sharing most of the main properties (such as bypassing shields). Additionally they can be also performed in the air, making them more versatile in some situations. These grabs are:

The angled grab is a Chibi-Robo-only technique. The player can angle their grab both upwards and downwards, to more easily grab aerial opponents. However, neither variation has the same range as the default one, being longer, and thus, laggier.

The grab clank, also referred to as the grab break, is a mechanic in which two characters attempt to grab each other at the same time. When this happens, neither of them will grab successfully and each will take 2% damage. Grab clanks will not happen to special grabs, and instead, one of the players will always manage to grab the other one, due to port priority.

This list of characters grab ranges from longest to shortest. These are just estimates of a character's grab range and is subject to change.

Yoshi after grabbing an opponent on Hylian Skies.
Add a photo to this gallery 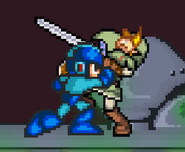 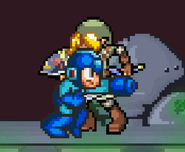 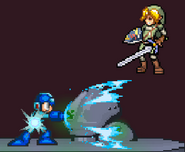 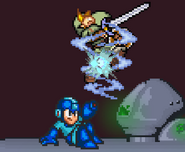 Mega Man attacking Link with his up throw. 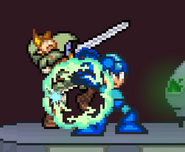 Mega Man hitting Link with his back throw. 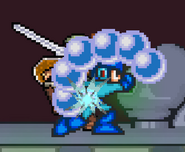 Mega Man's down throw hitting Link.
Add a photo to this gallery
Retrieved from "https://mcleodgaming.fandom.com/wiki/Grab?oldid=170635"
Community content is available under CC-BY-SA unless otherwise noted.