This article is about Goku's appearance in Super Smash Flash 2. For general information about the character, see Son Goku.

Goku is a newcomer starter character in Super Smash Flash 2. He first appeared in a teaser, transforming into Super Saiyan 3 form and releasing a True Kamehameha at his opponents. Despite the anticipated confirmation, he was not playable until Super Smash Flash 2 Demo v0.7.

Goku is currently ranked 41st on the current tier list, placing him in the C tier; a slight drop form his 37th place position on the last tier list. Goku has a solid aerial game, amazing combo ability, and KO moves in his forward smash, up smash, forward and back throws when used near the ledge, and the Kamehameha. He also possesses has the ability to float, which gives him a good horizontal recovery and the ability to auto float-cancel which aids in his aerial game on stage. Goku's down special move, Kaiō-ken, when activated, increases his speed, power and the hitstun of his attacks. His time in Kaiō-ken will extend if he continues to hit his opponent. Due to this Goku can combo and zero-to-death combo the entire roster. He can also use Kaiō-ken to slow his descent in the air and can use the Kamehameha to slow his descent and push himself backwards, helping him with horizontal recovery if he can no longer float, thus giving him an amazing horizontal recovery overall.

However, Goku has problems with range in most his attacks leaving him vulnerable to characters with disjointed hitboxes (ex. Meta Knight and Sora). Additionally, Goku's tall frame, combined with his high weight and being a high faller, makes him susceptible to combos and chain grabs. While Kaiō-ken has its benefits, it damages Goku for every half-second it is active and the time will be extended as long as he hits his opponent or his opponent hits him, which makes using Kaiō-ken very risky and situational, and also makes Goku lose some of the priority on his attacks. His side special move, Ki Blasts, is a very poor projectile that deals very weak damage and knockback, has low priority, can be reflected, and can be avoided by characters who are small in size. Additionally, Goku's main means of vertical recovery, Instant Transmission, can be easily edgehogged due to it not having an hitbox at the end of the move unless the initial hit connects, and also has very poor absolute vertical gain, and Goku almost immediately loses the height gain when using the move due to not keeping any type of momentum.

Goku appears to have a moderate player base. However, he has a lackluster representation in online tournaments.

Goku is a character that focuses on speed and power. He has the ability to auto float-cancel, which aids in his air game along with his aerials having good priority. His down air has a lot of priority which allows him to deal with projectiles. He has a projectile in Ki Blasts, which he can use to zone his opponents or hinder their approach. He has KO moves in his forward smash, side tilt, forward and back throws (when used near the ledge) and back air.

Goku has different recovery options with having the ability to float which covers a good horizontal distance, Instant transmission covers decent vertical distance while making him intangible for a second, he can use Kamehameha for horizontal recovery when fully charged and can use the start up of Kaiō-ken to slow his falling speed.

Goku has a good grab game, possessing the seventeenth longest grab in the current demo, with his up throw being a chain grab on fast fallers while being a combo starter on other characters. His down throw can chain throw characters at low percentages. His back and forward throw can be used as KO moves when used near the ledge. His down special move, Kaiō-ken, when activated increases the speed and power of his attacks. His forward air no longer needs to be sweet spotted to semi-spike and his down air becomes a meteor smash, with both having high base knockback making it is to KO opponents. His smash attack no longer need to be charged.

However, Goku suffers from subpar range in most of his attacks which leaves him vulnerable to characters with disjointed hitboxes (ex. Ichigo and Lloyd). His projectiles are weak and can be canceled out very easily by other attacks. This gives him more trouble playing a neutral with characters who can shut his options down.

Due to Goku's height, above average weight and being a high faller; makes him susceptible to combos, chain grabs and zero-to-death combos.

Kaiō-ken is a very situational move due to it damaging Goku every half of second it is activated, the move stays activated every time the opponent hits him which makes him more susceptible to zero-to-deaths while using the move.

Even though Goku was considered a top tier character in demo v0.9a, Goku received a lot of buffs and a few nerfs in v0.9b. Due to the lower hitstun of the demo, Goku is less susceptible to chain grabs while still being able to combo like last demo.

In demo v0.8b; Goku's position dropped to 12th at the bottom of C tier where he was seen as a mid tier character.

In demo v0.9a; Goku rose to 6th of what can be considered A tier, where he is now seen as a top tier character again.

In Beta 1.0.0, Goku had received multiple buffs and was able to chain grab back throw into itself until very high percentages. That, accompanied by buffs to Instant Transmission, made him rise to first spot in the tier list. Goku was toned down in the following two subversions, making him drop to 12th spot. In Beta 1.1, though, Goku was considerably nerfed once again, with his recovery being the most affected part. That, coupled with Goku's lack of range, made him drop to 37th place on D tier, which is his current placement.

Goku's first/second art, used in the character selection screen from v0.7 to v0.8b. 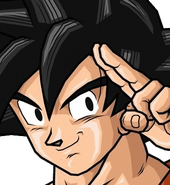 Goku's third artwork in the DOJO!!!.

Goku using his down smash against Lucario and Ryu on Central Highway.

Goku hitting Zero Suit Samus with the Ki part of his down aerial on Tower of Salvation.

Goku using his back throw against Bowser while Mario taunts on Final Destination. 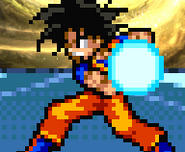 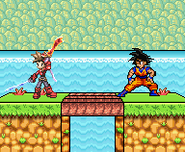 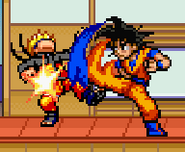 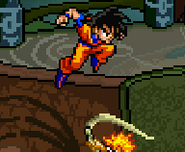 Goku jumping at Ichigo on Tower of Salvation.

Goku using his down smash on Crateria.

Goku doing his side taunt and Wario using Chomp on Hidden Leaf Village.