Gligar (グライガー) is a dual-type Ground/Flying Pokémon that evolves into Gliscor when leveled up at night, while holding a Razor Fang. He appears in Super Smash Flash 2 as a common Pokémon that can be released with Poké Balls.

Hence its appearance, Gligar is a small, purple, bat-like Pokémon. It has blue wings, which are similar in function to a flying squirrel's, and have pointed purple tips at the edges of the membranes. Gligar has pincers on its forelegs, and a segmented, insectoid tail with a stinger on the end. It has short hind legs, and feet that appear segmented with a large, single claw each. Additionally, It has long, pointed ears and triangle-shaped eyes, fangs and a large tongue which is often seen out of its mouth. It could be considered a cousin of Skorupi due to its scorpion-like traits; however, it shares some bat-like traits as well.

Gligar knows a small handful of poisonous attacks, such as Poison Sting and the rarely known Cross Poison. It can also use a few Bug-type moves, like Fury Cutter and U-turn. While Gligar can learn Ground and Rock-type moves typical to a Ground-type Pokémon, its abilities as a Flying-type are limited. Most notable is the fact that it cannot learn Fly. Also, Gligar and its evolved form Gliscor are two out of three Pokémon that are both Flying and Ground, which gives them an immunity to both Electric-type and Ground moves.

Flying straight at the foe’s face, it startles them by clamping on with its clawed hind legs and the pincers on its forelegs, before jabbing with its poison stinger. Gligar also tend to ambush prey as it passes by below. When it is done gliding, it hops along the ground back to its nest. It live in mountainous regions, making their nests along cliff sides. It also prefers hot arid environments, but does not mind forests either.

As stated above, Gligar can be released from a Poké Ball in Super Smash Flash 2. Once it is released, Gligar will pick a single target and then use Fury Cutter in which it rushes at an opposing player to damage them before disappearing. Gligar will then reappear and strike again. Gligar repeats this process a few times before disappearing for the final time. Gligar works in a somewhat similar manner as Latias and Latios worked in Super Smash Bros Brawl. Gligar deals more damage as he keeps slashing. However, should Gligar miss even one, its chain of attacks will cease.

Gligar about to use Fury Cutter at Bomberman idling on Venus Lighthouse. 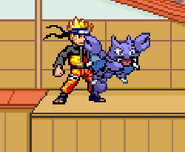 Gligar next to Naruto on Hidden Leaf Village. 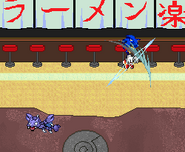 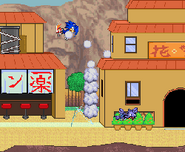 Sonic being hit from Gligar. 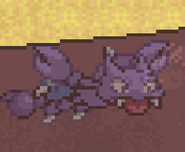 Gligar being released by Tails on Meteo Campaign.