This article is about the technique originally present in Super Smash Flash 2. For one of Sora's old up special moves, see Glide.

Gliding (滑空) is a technique that was originally present in Super Smash Flash 2. Based on the technique of the same name in Super Smash Bros. Brawl, it was performed by holding the jump button after midair jumping, which allowed the character to move through the air at a fast pace without losing much vertical height in the process. The player could angle the glide downwards to dive, or upwards to climb. It was possible to stall the glide, as well as end it prematurely, if the player tried to climb above the glide activating point. When gliding, the player could not turn around until the glide ended.

Sora had the ability to glide out of a midair jump — called a jump glide — from v0.6 to v0.7 of the demo, while Meta Knight could do it only in v0.9a. However, they would instantly go into their gliding animations after using their up special move until v0.8b, in Sora's case, and until v0.9b, in Meta Knight's.

The floating and hovering abilities are similar to gliding, in that they dramatically increase one's horizontal recovery. However, hovering allows the player to turn backwards, floating halts vertical momentum, and both of those can be cancelled into any aerial, instead of having their own type of aerial attack, which is explained in the section below.

The glide attack was an attack originally present in Super Smash Flash 2 that could be performed while gliding by pressing the attack button. However, if a character glided out of their up special move, they would go to the helpless state. Meta Knight would also become helpless if he tried to glide attack after using his last midair jump.

As Meta Knight, trying to jump glide would instead make him execute either his forward aerial or his down aerial, depending on whether or not the down direction was being pressed. He could also cancel the glide into back and up aerials via the C-Stick buttons, however.

Trying to perform the glide attack as Sora would always make him use his forward aerial.

Meta Knight cancelling his glide into a forward aerial.

Meta Knight failing to land on Hidden Leaf Village due to a bug.
Add a photo to this gallery 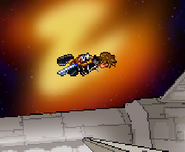 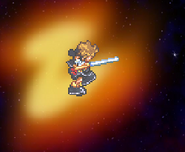 A helpless Sora, after cancelling Glide.
Add a photo to this gallery
Retrieved from "https://mcleodgaming.fandom.com/wiki/Gliding?oldid=178852"
Community content is available under CC-BY-SA unless otherwise noted.