Galaxy Tours is a starter stage in Super Smash Flash 2 that functions as a compilation of various sub-stages from the games Super Mario Galaxy and Super Mario Galaxy 2. The stage takes fighters throughout different locations or galaxies from the aforementioned games. Players ride on the Starship Mario, which acts as the main form, to journey through various galaxies.

Galaxy Tours primarily takes place on the Starship Mario, with the main gimmick being that players are transported into different galaxies that drastically change the stage layout. The galaxies are visited at random, with the main form coming some time after a regular galaxy is visited. Each galaxy consists of a series of platforms in the shape of planets.

On the Starship Mario itself, matches take place on the small boat-like deck. When still, the ship has three or four colored pass-through platforms which appear in one of five randomly selected layouts each time Starship Mario appears. When the ship is about to travel to a galaxy, the platforms will disappear. Many Lumas can be seen soaring and wandering around the ship, including Lubba at the wheel.

Good Egg Galaxy consists of a planet with one side covered with grass. In the middle is a pleasant house alongside a tree with an orange Warp Pipe and a signpost on its roof. The main platform has two bridges, one on each side, that lead to the opposite side of the planet, though it cannot be reached. This side included a large tower and several dead trees.

Freezeflame Galaxy mainly consists of a ring-shaped platform of ice in the middle with a smaller ice platform above the hole. Both of these platforms have less traction than normal platforms, leading players to slide across them more when stopping or changing directions. A small platform of cooled magma appears on either side of the ring, with the left being below it and the right being above it. In the background, a large lava core planet can be seen, as well as four balls of fire and lava.

Toy Time Galaxy consists of two main sets of platforms in the shape of planets. The planet on the left includes a checkered blue block with a checkered orange one behind it on the left and a blue and yellow block with a fan inside on the lower right, with a conveyor belt moving right in-between them. The planet on the right consists of a tall blue block with two platforms attached on the left side, with the top one being a conveyor belt moving left. Additional planets can be seen in the background, including a circular train track with a toy train on the left and a giant planet shaped like 8-bit Luigi on the right. There is also a red wind-up key floating above the right planet in the background, similar to the one on Mecha-Bowser.

This stage is banned in tournament play. Though all five possible layouts of Starship Mario are in themselves potentially viable, the random selection upon the match starting can easily be abused by players feigning the need to reset the match in order to get a different layout that would benefit themselves more, especially online. It is also not repeatable in the case of a tie breaker, connection failure, or other reason a given match may genuinely need to be reset with the same characters and stage choice.

The overall concept of Galaxy Tours is taken from the fact Mario has to visit a wide arrange of multiple galaxies in both Super Mario Galaxy games in order to retrieve the stolen Power Stars; the more stars he retrieves, the further he is allowed to travel in the universe. In Super Mario Galaxy, Mario can visit a galaxy by entering a dome in the Comet Observatory, where he then gets launched to the selected galaxy. In Super Mario Galaxy 2, Mario instead directly travels to galaxies using the Starship Mario, a planet and spacecraft in the shape of Mario's head. This spacecraft is inhabited by Lumas who put Mario in command of it in order to retrieve the Power Stars.

In both games, there are many different galaxies that can be traveled to, with each consisting of a series of planetoids. Notably, each planetoid has its own type of gravity that affects Mario and other objects, such as drawing them in on all sides. However, this mechanic is not implemented in SSF2, as players simply fall down like normal.

Good Egg Galaxy is the first galaxy found in the Terrace, as well as the second overall galaxy Mario must travel to, in Super Mario Galaxy. Due to the lack of a central theme, it is considered the only "true" and "basic" galaxy in the game. The stage in SSF2 takes place on the planet where almost all of the galaxy's missions start, with most requiring Mario to walk onto the darker side to find Launch Stars. It also has the most planets of any galaxy in the game, with a total of 19 planets.

Freezeflame Galaxy is the second galaxy found in the Bedroom in Super Mario Galaxy. As the name suggests, half of this galaxy consists of freezing water and ice, and the other half consists of fire and lava. The stage in SSF2 mainly takes place on the thin ring of ice where most of the galaxy's missions start. The platforms on either side of it closely resemble the large lava core planet visited in the mission "Freezeflame's Blistering Core", which also appears in the background.

Toy Time Galaxy is the third galaxy found in the Engine Room in Super Mario Galaxy. Toy Time Galaxy is, as the name suggests, a playroom-themed location filled with toys made out of large rainbow-colored building blocks, as well as eating utensils and desserts. The stage in SSF2 incorporates four different planets from the galaxy, including one of building blocks and conveyor belts, one with large building blocks in the shape of a train engine, one with a train track and a train circling it, and one giant planet in the shape of an 8-bit Mario with Luigi on the other side.

The following are all the possible platform layouts for Starship Mario. It has to be noted that this order is not strict and, as with other galaxies, is completely randomized:

Mario using Mario Tornado with Baby Luma next to Peach, who is idling.

Bowser on the rock platform of Freezeflame Galaxy.

Tiny Mario and Tiny Luigi standing on the house of Good Egg Galaxy.

Galaxy Tours, as it appeared in the first Smash Flash DOJO!!! in early 2008. 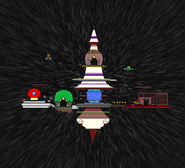 Rosalina and Polari as background characters on Comet Observatory.

Starship Mario in the background of Comet Observatory. 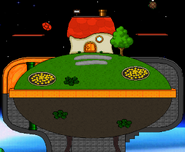