McLeodGaming Wiki
Register
Don't have an account?
Sign In
Advertisement
in: Articles under construction, Upcoming, Games of McLeodGaming,
and 3 more

Fraymakers, initially codenamed McLeodGaming Next, is an upcoming indie crossover fighting video game developed by Team Fray and published by McLeodGaming. The game is a "platform fighter" in a similar vein to Super Smash Flash 2 and features a cast of characters and stages hailing from independent game franchises such as BIT.TRIP, Downwell, Octodad, and Rivals of Aether. Touted as "the Infinitely Replayable Indie Platform Fighter", it is included with a development tool called FrayTools that allows for streamlined creation and implementation of custom-made content. An early access version of the game is set to be released for Microsoft Windows, macOS, and Linux through Steam in August or September 2022. A Nintendo Switch release of the game is also planned.

The gameplay of Fraymakers is heavily inspired by that of the Super Smash Bros. series of games, in that it is a platform-based fighting game where up to four players are tasked with knocking their opponents outside the boundaries of the stage. Each player has a damage total represented by a number that starts at 0 and increases as damage is taken. As players take more damage, attacks will knock them progressively farther away, making it easier to be launched off the stage. Players are generally able to recover back onto the stage upon being launched off, but failure to do so will lead to them falling out of bounds, resulting in a KO.

Like in the Super Smash Bros. games, the controls in Fraymakers are simplified compared to traditional fighting games, with most attacks being performed by pressing one button and holding in a direction. Players are able to move and jump freely across stages and platforms. One button is used for standard attacks including several grounded attacks and five aerial attacks. Another button is used for four special moves, which are more unique than the standard attacks and generally have more complex functions. A third button can be used to hold a shield out in one direction, which can block attacks but leaves the player vulnerable on the other side. Pressing the shield button and the special move button together will perform a parry against an incoming attack, leaving the player vulnerable if mistimed. When in mid-air, players are also able to use an airdash to gain momentum in any direction and cancel it into an aerial attack.

Each playable character features unique attacks from one another, along with differing properties such as running speed and weight. In addition to choosing a playable character, players are also able to choose one of many Assists to summon during battle, each of which performs a unique function and can be used after filling a gauge by attacking opponents. There is also a variety of optional items that can appear randomly around the stage for players to interact with.

Fraymakers is currently planned to feature at least ten characters hailing from differing independent games, nine of which are included in the base game. Each character is designed to have a unique and distinct playstyle while also carrying attacks from their source franchises.

Below is a list of the six characters currently confirmed for the game.

In addition to its playable roster, Fraymakers is set to feature a wide array of Assists to be called upon mid-battle. Each playable character is able to be selected as an Assist, and there is a large selection of guest characters to be featured exclusively as Assists. Currently, 50 Assists are planned for the game, not counting playable characters.

Below is a list of the 23 characters currently confirmed as Assists for the game.

Currently, thirteen stages are planned to be made available in Fraymakers for players to fight on. Much like the characters, each stage hails from an indie game and features references to their original games. Each stage will also have optional stage hazards that can change the mechanics or layout.

Below is a list of the six stages currently confirmed for the game.

The standard multiplayer mode in Fraymakers is planned to allow up to four players to select the characters, Assists, and stage of their choice and fight each other in a free-for-all or team battle. Various customizable rules such as turning off Assists, items, and stage hazards will be available, and players will also be able to select any downloaded user-generated content. Match Modifiers will allow players to customize additional aspects of the match, such as player size and match speed, as well as adding more significant gameplay changes such as randomized Assists and a permanently filled Assist meter.

Multiplayer matches will also be available online, allowing two or more players to fight via an Internet connection. The online infrastructure uses rollback netcode, and matches can be set up through either matchmaking or having one player host a room with specific rules. User-generated content can also be used online.

Planned single-player content includes a mode in which a player must break a set of targets as quickly as possible. Additionally, a "training" mode will allow players to freely practice gameplay with in-depth features such as viewable hitboxes and setting a computer player to perform a certain action.

Fraybets is an online game mode in which players watch and wager in-game currency on automatically generated computer player battles featuring user-generated characters, Assists, and stages. As these battles are hosted online, all players are able to view the same battles simultaneously.

Many of the assets in Fraymakers are built using FrayTools, a custom cross-platform development tool that comes included with the game. Because of this, players are able and encouraged to use FrayTools themselves to modify the game by creating their own custom content, including playable characters, Assists, stages, items, game modes, and even menus. In addition to the user interface offered by FrayTools, players are able to test and adjust their custom content from within the game itself through a custom sandbox. Once custom content is complete, players are able to upload it for other players to browse in-game and download for themselves, and it can also be loaded directly from files.

On July 25, 2017, shortly after the release of the Beta version of Super Smash Flash 2, Adobe announced that it would end support for Adobe Flash Player, which SSF2 uses for its engine, on December 31, 2020. Although SSF2 would remain playable and in development, this led the game's director Gregory McLeod to decide that he should work on a more sustainable and commercially viable project that would not rely on the aging software. Having developed SSF2 for many years, he wanted to apply what he learned from his experience into a new platform fighting game, which the development team had frequently come up with ideas for.[1] Discussions would continue over the Internet and at events such as Super Smash Con, with one founding concept being user-generated content. Although the idea was previously considered for SSF2 with expansion characters, the developers desired a more accessible and streamlined implementation than what SSF2 would have allowed for. Other loose concepts, including a playable roster of characters from other independent games and an additional roster of assist characters, would also be established early into planning the game.[2] Plans for the game were first publicly teased on March 23, 2018 in a YouTube video by Bowler, in which the now former Team Fray member James Hadden teased that SSF2 developers may develop an original platform-based fighting game in the future and gauged interest from the video's audience.[3]

Production of the game alongside FrayTools started privately in 2018 with a small team consisting mainly of current and former SSF2 developers. Additional developers were also contracted to assist with artwork and programming, along with Kira Buckland, who would be the announcer for the game to reprise her role from the original Super Smash Flash, and the jazz band Super Soul Bros., the members of which would produce the soundtrack for the game. Many different independent game studios were also contacted to provide licenses for the franchises included, which the developers claim were very approachable.[2] For prototypes of the game, much of the spriting and programming work would be performed using SpriteSatchel, a tool designed by McLeod to convert SWF files to HTML-compatible sprite sheets, in order to maintain the workflow offered by Adobe Flash development from SSF2. However, as FrayTools became more stable, it quickly became the standard tool used during development.[2]

On September 10, 2020, the game was publicly announced under the codename McLeodGaming Next and scheduled to be formally revealed through Kickstarter during winter.[4] The official name was later revealed to be Fraymakers on October 13, 2020, with the Kickstarter date being changed to November of that year.[5]

The Kickstarter campaign showcasing the game was launched on November 18, 2020, with plans to include six playable characters, twenty Assists, five stages, a soundtrack by Super Soul Bros., custom content using FrayTools, and online gameplay with rollback netcode, among other features. Its minimum funding goal was $46,000, which was reached within three hours of the campaign launching.[6] To promote the game during its campaign, various content showcases were released to Kickstarter, stretch goals were planned and revealed for additional features, an art contest was held on Newgrounds, and developers appeared in several videos and podcasts to discuss the game. The campaign ended on December 17, 2020 after receiving a total of $364,922 and fulfilling most stretch goals, including three additional playable characters, a downloadable character to be released after the game's launch, thirty additional Assists, eight additional stages, Super Attacks, match modifiers, the Fraybets game mode, two alternative soundtracks by OverClocked ReMix and Jules Conroy, Jacob Alpharad Rabon and Joshua TomaMoto Tomar as alternative announcers, a Nintendo Switch release, and animated reveal trailers for two of the unannounced characters.

Various rewards were promised for backers depending on their pledge, including copies of the game, access to the tester build, access to backer-exclusive channels and developer Q&A's on the McLeodGaming Discord server, exclusive online tags and golden costumes for characters, having their name in the game's credits, a digital tome, custom artwork of a character, and having that character appear in the credits. All backers are set to be given surveys for feedback and specifying their rewards.

Development of the game continued after the Kickstarter campaign ended with a goal to release the game in Early Access by early 2022. On May 1, 2021, #SaturdayFray was announced as a move to showcase small development updates such as new animations, stages, and music every Saturday on the Fraymakers Twitter and Instagram accounts. Through this, the first four characters to be made available in the Early Access build of the game were revealed, including CommanderVideo, Welltaro, Octodad, and Orcane. Additionally, a poll was held from December 18, 2021 to December 31, 2021 to determine an Assist hailing from Rivals of Aether to be added.[7] The final #SaturdayFray announcement took place on June 4, 2022 with the reveal of Niko as an Assist, with additional updates still planned to be shown afterward.

On February 2, 2022, Team Fray released a progress update to Kickstarter, revealing that the early access release of game had been delayed from early 2022 to August 2022, with the tester build being scheduled for June or July 2022.[8] On April 1, 2022, a second trailer for the game premiered during Rivals Direct 4, which revealed Kragg as the winner of the Rivals of Aether Assist poll and showcased the content to be made available at the launch of Early Access. On June 20, 2022, a second progress report was released, which revealed a release window of August or September 2022 for early access and July or August 2022 for the tester build.[9]

The initial banner image of the first six playable characters, used during the Kickstarter campaign.

The promotional image used for the Kickstarter campaign. 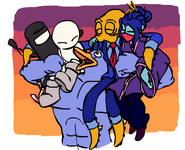 The image released to celebrate the Kickstarter campaign's success.

The image released to tease the seventh playable character.

New Rivals of Aether Assist in Fraymakers!
The trailer released during Rivals Direct 4.