Food frequently appears on stages, and due to their small rate of healing its variants tend to have, they appear very commonly, usually spawned in great numbers after opening a Party Ball. Each variant recovers either 1%, 3%, 5%, 8%, or 10% damage.

Mr. Game & Watch has the ability to spawn food himself if he successfully connects a #7 with his side special move, Judge. A subtle difference between the food spawned by Mr. Game & Watch in SSF2 from the Super Smash Bros. games (aside the food no longer being restricted to be only an apple) is that for each character hit, a different piece of food will appear instead of only one. This means that if Mr. Game & Watch is able to strike all the opponents at once with his hammer, up to three different food variants will be spawned. This may proved to be an advantage and disadvantage at the same time for Mr. Game & Watch, as he may be able to collect all the dropped food after launching the opponents but also unaffected characters may be able to collect the food instead during Mr. Game & Watch's freeze frames.

Food may also be considered a stage element that appears outside the common item spawnage. Only three stages are able to dispense food in the game: Yoshi's Island (64), Yoshi's Story, and Smashville (coincidentally, all are past stages). These stages distribute food in a similar manner: it is carried towards the stage by something and characters have to attack the carrier so the food may be dropped and consumed. In Yoshi's Island (64) and Yoshi's Story, the food is carried by flying Propeller Shy Guys whereas in Smashville it is carried by floating balloons. Propeller Shy Guys usually come in great numbers, making the food droppage greater on average in comparison to Smashville's, where only a single balloon will appear at the time. Disabling food with the item switch removes the food from the carriers, who will still come to the stage, despite not carrying anything.

Delibird is also able drop food items via his move Present. Delibird indiscriminately launches food out of his tail sack, and all players are able to collect the goods, including the characters who had not released it. Similarly, Delibird's Rocket Bombs, which can be launched alongside food items, will harm any player who comes in contact with them, including Delibird's summoner.

The following is a list of all the food variants that can appear during matches, accompanied by a brief description and the damage value they recover.

Food as a healing object is a very common staple in video games. Games from the Yoshi series and the Kirby series have a strong focus on food items, and being a gluttonous character is a trait of their respective protagonists. For instance, in Yoshi's Story, Yoshi has to eat a set of 30 fruits in order to complete a level, and eating fruit invariably heals Yoshi and replenishes his life meter. However, the concept of healing food in the Super Smash Bros. series, as well as SSF2, is more similar to how it is applied to the Kirby games. Beginning with Kirby Super Star, there is common food scattered across levels that acts a low-recovery item when Kirby eats it. Several food items are very similar between Kirby Super Star and SSF2 as direct result of this.

Kirby and Yoshi surrounded by lots of food on World Tournament.

Donkey Kong next to a bunch of Bananas on Jungle Hijinx.

Tails next to a carrot on Hylian Skies.

Early artwork for Food in SSF2.

Kirby with some pieces of food in their early designs. Some also went unused. 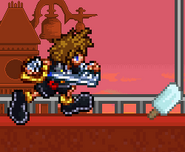 Sora near a Sea-salt ice cream on Twilight Town. 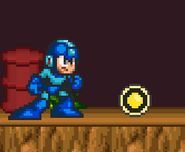 Mega Man next to an Energy Capsule on Castle Wily. 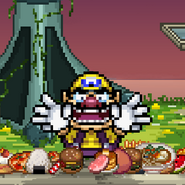 Pikachu crouching next to a Cheri Berry on Temple of Time.

Mega Man standing next to a Energy Capsule on Castle Wily.

Yoshi next to a small hamburger on Waiting Room.