The Firework is a red and yellow-striped rocket-shaped, projectile that travels a short distance after being thrown, dealing 7% damage to any opponent on its way, proceeding to explode afterwards and dividing into nine Fireworks that perform a big circling motion also explode shortly after. In certain cases, this item is a capable of dealing about 80% of damage, making it one of the most damaging items in the game, if the character happens to be hit by most of the explosions. Any damaging hitbox is capable of igniting a Firework. Normally, the thrower is safe from the explosions even if he/she directly comes in contact with them, however, if the thrower instead attacks the Firework, it will raise into the air and damaging the character in the same way as if it was normally thrown.

Initially, the Firework was supposed to not explode on contact with opponents, instead exploding only when it hits a wall, or, like in the currently implementation, after a while passes, dividing itself in nine and exploding afterwards.

Mario throwing a Firework at Sandbag on Saturn Valley.

The Firework next to Pichu on Casino Night Zone.

Jigglypuff throwing a Firework in the air on Sector Z.

Sora holding a Firework while taunting on Galaxy Tours.

Wario, Bowser, and Meta Knight being hit by the Firework from Sora on Saffron City.

Peach throwing a Firework, which hits Chibi-Robo. Notice that it does not explode.

A Firework hitting a wall, causing an explosion and dividing into more fireworks.

Fireworks flying in a circle around Peach on Waiting Room.

The Fireworks exploding after a few seconds. Notice its normal explosion effects. 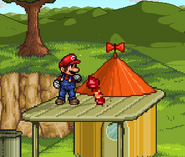 Mario in front of a Firework on Saturn Valley.