Fire Mario Eruption was originally Fire Mario's down special move in Super Smash Flash 2 prior to v0.5a of the demo, where it was replaced with Firewall Tornado.

When performed, Fire Mario would stand for a moment and saying "Let's a go!", looking down as he flashes twice and then surrounds himself with two pools of fire that erupt from beneath him. The fire would encase him for a moment and reach high up before disappearing back where they came from, leaving leaving Mario coated in a fiery shell before that disappears too. Opponents hit by the flame would be dealt 20% damage and decent knockback, though if Fire Mario would fail to hit any opponents, he would be open to being punished to the move's high ending lag. 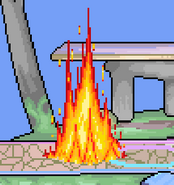 Fire Mario hitting Ichigo with Fire Mario Eruption, on Test Stage 2.
Add a photo to this gallery
Retrieved from "https://mcleodgaming.fandom.com/wiki/Fire_Mario_Eruption?oldid=165178"
Community content is available under CC-BY-SA unless otherwise noted.