This article is about Sora's Command Deck attack that served as his previous standard special move. For other uses, see Fire.

Fire (ファイア), also referred to by the Smash Flash DOJO!!! as Firaga (ファイガ), is one of the three possible outcome attacks for Sora's down special move, Command Deck, in Super Smash Flash 2. Prior to that, it was originally his sole standard special move prior to v0.9b of the demo, where it was replaced by Strike Raid.

When performed, Sora holds the Keyblade up behind him and shouts "Fire!" as he summons six small fireballs, which revolve around him quickly. The fireballs circle him for about half of a second before disappearing, ending the move. Opponents that make contact with the fireballs are hit up to once with 15% flame damage and strong knockback. Fire has high priority and is mostly used at the end of Sora's combos. If used in the air, Sora's decent is slowed and can move slightly to either side, which aids his horizontal recovery.

As a standard special move, the move itself acted almost identically to how it does in Command Deck. One key difference is that it had a sweet spot at the very beginning. Opponents hit by the sweet spot would be dealt 15% damage with strong knockback, while opponents hit by the sour spot would be dealt 7% damage with weak knockback. The move would also last for a longer period of time than the Command Deck variant, and Sora's decent was slowed less.

Fire is a recurring spell in the KINGDOM HEARTS series and the first spell introduced in the series, originating in the first game in the series. The spell also has two more powerful counterparts, with the first being Fira and the second Firaga. This series of spells unleashes flames to incinerate foes, inflicting Fire-type damage; however, the specific execution of the spell differs between games. The spell in SSF2 is based most closely on Firaga's KINGDOM HEARTS II iteration, where the caster creates a rotating ring of flames that surrounds the caster to inflict damage on nearby enemies.

The move's endlag, on The World That Never Was.

Fire being selected, on Twilight Town.
Add a photo to this gallery 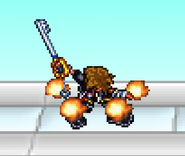 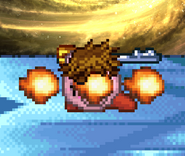 Kirby version of the move. 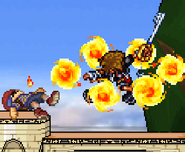 The fireballs of Fire disappearing at the end of the move.

Sora hitting Mr. Game & Watch with Fire, on Twilight Town.
Add a photo to this gallery

Retrieved from "https://mcleodgaming.fandom.com/wiki/Fire_(Sora)?oldid=181456"
Community content is available under CC-BY-SA unless otherwise noted.