McLeodGaming Wiki
Register
Don't have an account?
Sign In
Advertisement
in: Enemies, Enemies in Super Smash Flash, Characters,
and 6 more

As their name implies, they are silhouette versions of playable characters. Unlike most of the enemy teams in the official Super Smash Bros. games, both incarnations of the Silhouettes use the voices of the characters that they copy instead of remaining silent.

In Super Smash Flash, the Fighting Silhouette Team takes the form of gray silhouettes of any of the playable starter characters, as well as any characters that the player has unlocked. They mainly appear in each mode of Multi-Man Melee, and they also appear in stage 7 of Classic, labeled "Random Melee!", in which the player must defeat 12 Silhouettes to advance.

Because of SSF's already-limited movepool, the original Silhouettes are complete clones of the characters themselves. This in turn gives them access to complete movesets, allowing for better recoveries, which increases the challenge at the moment of facing them. Although they are somewhat aggressive towards the player, they also tend to deal reduced knockback while also being much easier to launch. However, the opposite is true in Cruel Melee, in which they deal increased knockback and are much harder to launch.

In Super Smash Flash 2, the Fighting Silhouette Team behaves differently. They now take the forms of negative monochrome versions of Mario, Link, Kirby, or Pikachu, using the same voices and movesets as these characters. Like previously, they mainly appear in each mode of Multi-Man Smash, and they also appear in stage 8 of Classic, labeled "Fighting Silhouette Team!", in which the player must defeat 20 Silhouettes to advance.

Like the enemy teams in the official Super Smash Bros. games, the Silhouettes are unable to use special moves, grabs, shields, sidesteps, rolls, air dodges, or taunts, and they also cannot grab ledges or pick up items. Much like in SSF, they generally deal reduced knockback while also being much easier to launch, with the opposite being true in Cruel Smash. They also have weak artificial intelligence and are relatively passive in most situations, whereas in Cruel Smash, they attack far more often than normal, often to the point of recklessness.

Despite being created with the same mechanic used to create filtered costumes, they are not available as selectable costumes for the player. 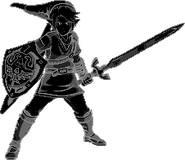 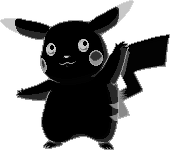