When performed, Falco darts straight forward at a very high speed, leaving a red trail of afterimages behind him. It behaves very similarly to how Fox's Fox Illusion behaves in SSF2, as it cancels his momentum at the start of the move and shoots him a fixed distance forward. The move can also be "cancelled" if the player hits the special input just as Falco is about to dart forward, moving forward only slightly. The attack itself deals 7% damage and decent downward knockback to any opponent hit by the afterimage left by Falco, but Falco himself cannot damage opponents he makes contact with. Unlike Fox Illusion, however, the move will also meteor smash opponents hit. The move is also slightly slower, has less lag, and seemingly covers slightly more distance.

Like Fox Illusion, the move is a very useful for recovering horizontally, though it also has a small ledge sweet spot and leaves Falco helpless after it ends, even when cancelled. It is also useful for edgeguarding from offstage, as the long distance the move covers makes for a safe way to meteor smash opponents. However, if used near a ledge, Falco may accidentally dart offstage with no way to recover.

Falco about to use Falco Phantasm on Lunar Core.

The trail Falco leaves behind when using Falco Phantasm.

Falco hitting Tails with Falco Phantasm. Note how the trail hits Tails instead of the physical Falco.
Add a photo to this gallery 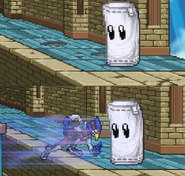 Falco performing Falco Phantasm on Sandbag.
Add a photo to this gallery

Retrieved from "https://mcleodgaming.fandom.com/wiki/Falco_Phantasm?oldid=158188"
Community content is available under CC-BY-SA unless otherwise noted.