The Explosive Tag (起爆札), originally called Exploding Tag, is an item coming from the Naruto franchise in Super Smash Flash 2.

The item was first introduced in demo v0.7 but was removed in patch for v0.9b. According to SSF2 developer, James Hadden, it was removed from the game because it was considered an "ugly" item, though he may have been only joking. However, in January 26, 2015, Alex Knowles, another SSF2 Developer now retired, revealed in the Smash World Forums that it was removed alongside Poké Ball, Assist Trophy, and Bumper because [they] randomly caused some game-breaking glitches a few days before releasing a build and may return in a future update.[1] When patch 0.9.1.1965 was released, all the missing items were reincorporated in the game except for the Explosive Tag. On April 14, 2016 SSF2 Dev Blog #7, revealed its return and with an updated design.

Every Explosive Tag in Super Smash Flash 2 comes attached with a kunai so they can stick on opponents or any other surface. Unlike the Naruto series, it does not need to be infused with chakra as the tag ignites automatically after it sticks on something. The Tag will start rapidly burning from the bottom and once it is fully on fire it will explode, dealing 19% of damage with medium knockback, capable of KO'ing at around 150%. This can help players who get hit by The tag to act quickly before it explodes. Attacking a travelling Tag before it sticks into something will automatically ignite it and will stop on the spot it was attacked.

The Explosive Tag is first seen in Chapter #46 of the Naruto manga, The Password is…?! (合言葉は…!!), where the character Oboro uses one against Sasuke Uchiha after he discovers he was disguised as Naruto Uzumaki. Within the series, the Explosive Tag is a scrap of paper inscribed with a special writing, centering around the kanji baku (爆). Infused with chakra, it will explode after a set amount of time, remotely, or after being ignited by flame. The Tag can be attached to a surface or wrapped around a weapon to be thrown at an enemy. It is a very versatile weapon and one of the most basic ninja tools. Ninja can confuse their enemies by obtaining fake exploding tags. They work even under heavy rain.

The Explosive Tag centered Sheik and Naruto on Hylian Skies.

The Explosive Tag is about to explode on the ground on Hidden Leaf Village.

Pit throwing the Explosive Tag towards the tent to explode. 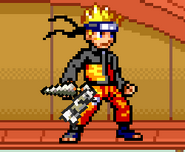 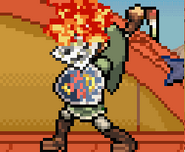 The Exploding Tag on Link. 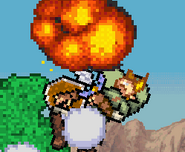 Sora running to Naruto, who is with an Exploding Tag in the air on Temple.