The Energy Tank (エネルギー缶), or E-Tank for short, is a staple item of the Mega Man series that appears in Super Smash Flash 2.

The Energy Tank is the best recovery item in the game, surpassing by a huge margin the previous holder of that title, the Heart Container. This is because it is able to reduce the character's damage meter all the way down to 0%, no matter how high it is. When this item is grabbed, the character will hold it over its head, akin to using an Assist Trophy, until fully healed; naturally, the player is extremely vulnerable while healing, and one hit of any strength will cause the Energy Tank to be dropped and disappear. This means the more damage the character has to recover, the more time he/she will be vulnerable while healing. The design of Energy Tank in SSF2 comes from Mega Man 2, its debut game.

Mega Man grabbing an Energy Tank to replenish his damage on Skull Fortress.

Black Mage grabbing an Energy Tank and being interrupted by Mega Man on Nintendo 3DS. 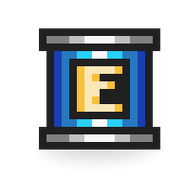 Mega Man and the Energy Tank on Castle Wily.

Bomberman and Kirby with a Energy Tank between them on Hylian Skies.

Bomberman about to attack the vulnerable Kirby.