Dream Land (プププランド) is a starter stage in Super Smash Flash 2 from the Kirby series that originates from the original Super Smash Bros..

Dream Land is a sprited version of the stage with the same name from Super Smash Bros. and a more accurate recreation compared to its previous counterpart. A very basic stage, Dream Land's layout is similar to that of Battlefield comprised of a big hard platform and three hovering soft platforms. Whispy Woods, a recurring boss in the Kirby series, is in the middle of the stage, facing right. He blows toward one side of the stage inducing the push effect.

In the background, a flock of Bronto Burts (or maybe just one) and King Dedede can be seen flying slowly getting across, from one side to the other, as in the original.

This stage is currently a counterpick in competitive play. The layout of the stage is very similar to those of Battlefield and Yoshi's Story, except with a considerably larger size that allows for greater flexibility in movement and spacing. Its most significant difference is its very high upper blast line, which makes vertical KOs require higher damage and thus greatly benefits light and floaty characters who would otherwise be KO'd early. Though initially used as a neutral stage, this was later changed in favor of Yoshi's Story, which itself was a counterpick before this change.

As stated above, Dream Land is the generic term used for Kirby's homeland, paralleling Mario's Mushroom Kingdom or Link's Hyrule. Whispy Woods is a common boss and was the first boss of the entire Kirby series. A wind attack is used by Whispy Woods in the Kirby series; however, this attack consisted of air puffs that caused damage and did not push the player.

Mario, Peach, Kirby and Jigglypuff among the flowers. 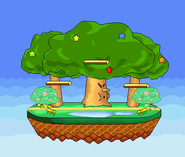