This article is about Donkey Kong's appearance in Super Smash Flash 2. For general information about the character, see Donkey Kong.

Donkey Kong is a veteran starter character in Super Smash Flash 2. He was the last newcomer announced in the original teaser, and could only be seen at the very end after the credits; here, he was seen with his sprites from DK: King of Swing. However, his appearance in the game has him using custom-made sprites which are based on his appearance in Super Smash Bros. Brawl and once again retains his realistic-gorilla grunts as his voice clips which are ripped directly from the same game. His moveset is similar to his Super Smash Bros. for Nintendo 3DS and Wii U counterpart.

Donkey Kong is currently ranked 10th on the tier list in the A+ tier. Donkey Kong has amazing range on the majority of his attacks, highly damaging combos, an outstanding grab and throw game, good momentum canceling, and very powerful finishers in all of his smash attacks, forward aerial, back aerial, back throw, and Giant Punch. His main recovery tool, Spinning Kong, covers great horizontal distance, has high priority, and gives him super armor in the move's initial frames. Donkey Kong has a strong air game due to his good air mobility and strong aerials overall.

However, his large size, heavy weight, and being a high faller make him arguably the most vulnerable character to combos and chain grabs in the game. He has difficulty dealing with projectiles due to a lack of his own, which limits his ability to approach camping characters. Additionally, Spinning Kong, in spite of its good horizontal distance, covers the lowest vertical distance in the game, which leaves him completely and utterly incapable of recovering if meteor smashed offstage, even at 0%.

However, Donkey Kong has a rather large player base due to how strong he is for a low amount of effort. This has caused some players to dislike the character, as well as the people who use him, due to how easy it is to exploit his strengths online. Donkey Kong players have continually taken high placings in online tournaments, though he is not as prominent as he once was, due to the rise of characters such as Lloyd, Zero Suit Samus, and Sheik.

Donkey Kong certainly has his slew of positive attributes; he has good range in most of his attacks which are also fast, amazing combo ability and above average mobility. He posses strong finishers in all of his smash attacks, a sour spotted forward aerial, Giant Punch, back aerial, the initial hitbox of Spinning Kong and back throw.

His greatest advantage is his grab game; he possesses a large grab range and his throws serve a variety of purposes. Forward throw allows him to carry enemies off-stage, back throw serves as a high-percentage finisher near the ledge, up throw sets up juggling combos and can chain grab certain characters. Donkey Kong's down throw is also a good combo starter and good for setting up chain grabs.

However, Donkey Kong's size, weight and being a high faller leaves him vulnerable to juggling, combos, chain grabs and zero-to-death combos himself, as his stature makes it highly difficult to avoid combo starters.

His recovery covers little vertical distance, giving him extreme vulnerability to meteor smashes in general, and if used at the wrong time can result in a fatal edgeguard, as the move offers no protection after the initial frames have passed.

Donkey Kong lacks a projectile and a reliable way to deal with them; although he can deflect those close to the ground with Hand Slap, it is only a situational maneuver at best, and he is still helpless against projectiles with more volatile trajectories; these attributes make it hard for Donkey Kong players to escape pressure.

Due to his aforementioned lack of a projectile and his lack of disjointed hitboxes, Donkey Kong also has trouble approaching; although his short hopped neutral aerial can out-prioritize weaker attacks thrown at him while he is moving towards the foe, he can still be shut down by characters with greater range in their attacks. Also, due to his great range not being disjointed, each range attack is also an extension of his hurtbox which can leave him vulnerable if not properly spaced.

When first introduced in demo v0.8, Donkey Kong was seen as character with great potential. He was ranked 10th of C tier for the list of demo v0.8b. He dropped to 24 of what could be considered C tier in demo v0.9a. However, he rose to 15th of what of A tier where he is seen as a high tier character. Changes in the metagame for v0.9b, has led to Donkey Kong's position rising to 13th of A tier where he is still seen as a high tier character. However, after 1.0.3. Donkey Kong has shown better results that ultimately ranked him 6th of A tier on the second Beta tier list. In the current tier list, Donkey Kong is ranked as 19 of B. 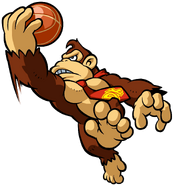 Donkey Kong about attack Kirby and Bandana Dee with his down smash while they are buried on Bowser's Castle.

Donkey Kong taunting near Kirby, who is using Giant Punch, on Jungle Hijinx. 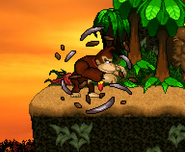 Donkey Kong pops out from a DK Barrel for his on-screen appearance on Jungle Hijinx. 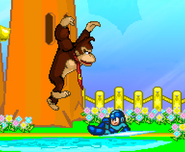 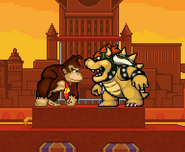 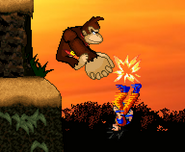