Delibird (デリバード) is a dual-type Generation II Ice/Flying Pokémon. It does not evolve into another Pokémon. It can be released from a Poké Ball in Super Smash Flash 2.

Delibird is a red penguin-like Pokémon with a sack-like tail. It has a patch of fluffy feathers on its chest that resembles a beard, and crests on its head. There is also a circular, white, button-like marking lower on Delibird's chest. Delibird has a white face with black rings around its eyes. Its beak and feet are light-yellow. Its most famous power is that it attacks by giving presents to its opponents, same it uses in SSF2. These presents, glowing orbs pulled from inside its tail, often explode, damaging the enemy. However, this move is unpredictable, even for the Delibird. The effect of the present could harm an opponent, or could even help it. Delibird is the only known Pokémon that learns Present by leveling up, and that is the only move it learns that way. It can learn other, more traditional Ice and Flying-type moves by more indirect means. Delibird carries food bundled up in its tail, carrying it wherever it may go. It spends all day carrying food to its awaiting chicks. They are often delivering items to either Pokémon or people. The deliveries are often from humans, but may be from Pokémon. They tend to live in mountainous regions, making their nests over sharp cliffs.

As stated above, Delibird appears as one of the many Pokémon that can be released from a Poké Ball in Super Smash Flash 2. The Delibird that appears in SSF2 is based on the Team Rocket's Delibird, a recurring Pokémon seen in the Pokémon anime. As such, once it is released, it uses its signature move Present to throw Food across the stage. However, he may also throw Team Rocket Bombs (known as "Blaster Balls" in the English dubbed anime) that deal 10% damage, rather than food at the players it also has a small chance to throw a Maxim Tomato. 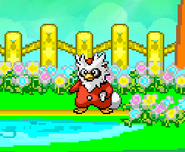 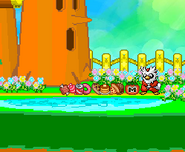 The food appears from Delibird. 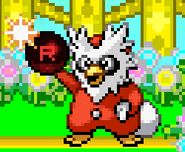