Cucco (コッコ) is a chicken species that appears in nearly every The Legend of Zelda game to date. Cuccos are very infamous creatures, since their introduction in The Legend of Zelda: A Link to the Past, if Link hits a single Cucco enough, it will effect its "revenge", bringing a flock of Cuccos to take him down until he leaves the current place or if he faints.

The Cucco is not currently available to use in SSF2 and may be added back in a future update.

Cucco is an item in Super Smash Flash 2. It can be thrown like most other interactive items; however, if the player jumps while holding it, the Cucco will start flapping its wings frantically, slowing your descent. Also, if the player attacks it seven times, other normal Cuccos and a golden Cucco will appear to attack the player. The golden Cucco does more damage than the regular Cuccos. The flock will do damage to any player that comes in contact with them, however they will only chase the one player who attacked them, meaning they will not rack up damage to others nearly as much. The best thing to do is to run away from them, or make an quick attack in the player that is being attacked from a direction that the attacking player do not take damage. They will keep attack until they disappear their own. Even if the player they're attacking dies, they will still go after the player.

As stated above, Cuccos debuted in The Legend of Zelda: A Link to The Past. In this game, Cuccos are found in Kakariko Village and play no major role in the game, except Link can annoy them by striking them with the sword. The catch is, that if one is provoked enough, it will execute its infamous "revenge" by calling a flock of angry Cuccos that will incessantly attack Link until he faints, enters a building or leaves the area; the attack lasts about 10 seconds before the Cuccos' swarm stop coming. Cuccos continued to have this behavior in all of their subsequent appearances, except in games they do not appear or in The Legend of Zelda: Twilight Princess, where provoking a Cucco long enough results in an Easter egg where the player can control the bird for a short time. 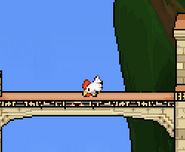 The Cucco on Temple. 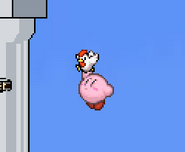 Kirby using a Cucco to hover. 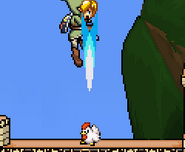 Link using his down aerial to hit a Cucco. 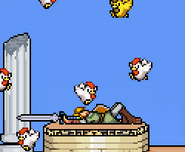 Link lies down after being hit by a Cucco.

Link crouching next to a Cucco on.

Link using his neutral aerial to attack a Cucco.

Link being attacked by a flock of Cuccos.