Costumes, also known as palette swaps and color changes, are a feature in Super Smash Flash 2, Yeah Jam Fury, and Fraymakers that allows characters to swap between different appearances with different sets of colors and outfits.

The base sprites of each character in the game consist of separate color palettes for certain elements of that character's appearance, such as their clothes, skin, hair, or weapons. With costumes, these palettes are then separately recolored so that the new colors appear for the sprites in-game. Each costume consists of different colors and is normally meant to represent a specific color or style. This also includes "retro costumes", in which varying shades of colors are made the same in order to resemble sprites in 8-bit games.

Players can choose their costumes from the character selection screen. In Free-for-All matches, players can select any of the costumes their characters have available, and each one can be used by only one player at a time. In Team Battle, characters can only change color by changing teams (which supports only three colors: red, green and blue). If team members choose the same characters, the second will have a lighter tint applied to their character; a third member will have a darker tint.

In online matches, if two players select the same costume, the host is forced to use the default color while the other player keeps the color they have chosen. If both players pick the default color, the host uses the secondary color of the character.

History of costumes and coloration processes

Given their greater importance in the official Super Smash Bros. games and their absence from SSF, costumes in SSF2's history have been a subject of debate, discussion, controversy, and requests.

They were first presented in version 0.4a of the demo as basic tints of red, green, and blue, which were solely for the purpose of Team Battles. This remained the same until version 0.9a, which incorporated more complex color changes, replacing the old tints. These costumes, officially referred to as "filtered costumes", were also simple tints and hues applied to the default design of the character, but unlike the former tints, they allowed for a greater variety of multiple colors on the character design as opposed to one shade of color. Many of these costumes garnered strong controversy from the community due to their simple nature, causing them to appear unnatural and unappealing such as human characters having green or blue skin tones. As such, improved costumes were one of the most frequently requested features to be included. In response, former developer Alex Knowles released a now-deleted video in 2015 where he explained the process of making costumes, which consisted of manipulating several color gradient bars and applying hues to reach a satisfactory costume, and how the developers are only able to do so much with the limitations of Adobe Flash, as more complex costumes would likely require far more work and data to include. Developers frequently updated filtered costumes over the course of the game's development to overcome complaints.

The addition of true, alternate colored costumes in SSF2 would be later implemented for Beta 1.2 and is considered one of the most technical achievements in the game's history, as it was originally believed that adding more complex costumes would exponentially increase the game's file size. The current method for creating costumes was discovered by developer Refurin in April 2019 and consists of picking individual shades of color from sprites, one by one, and recoloring each to the desired shade. In order to facilitate this coloring process, certain raw sprites within the game's data are purposely made with multiple colors that would otherwise look unnatural on that character should the recolor not be applied. For example, characters' eyes, individually sclerae, pupils, and irises, are commonly colored red, yellow, blue, or any other bright color that may require a different eye coloration for a specific costume. According to Refurin, this method had not been known or used in Flash before its implementation in SSF2 and unlike other, more traditional methods of including costumes, this method only marginally increases the file size.

After clearing the final level of Yeah Jam Fury, China Shop, the player unlocks the ability to switch between two sets of costumes, referred to as threads, in the settings menu. The first set of threads is simply the characters' default clothes, whereas the second set has each character wearing a golden hat, a golden jacket, gray earmuffs, a white shirt, and black pants. Unlocking these threads unlocks the Unlocked Cool Clothes! trochieval. In Style-themed and Desert-themed levels, their colors are unaffected. Much like in SSF2, these changes are purely cosmetic and do not affect gameplay. 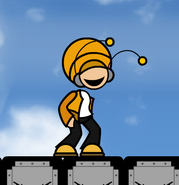 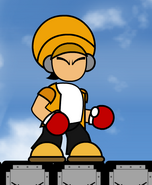 All playable characters in Fraymakers have a set number of costumes, though it is unknown how many there will be. Unlike in Super Smash Flash 2, any costume can be selected in Team Battles, which instead use a colored outline around each character to indicate their respective teams.

Like in SSF2, costumes in Fraymakers are accomplished through color separation of a character's base sprites into palettes that are then individually recolored for the sprites in-game. Each costume consists of different colors and is normally meant to represent a specific color or style. Notably, each character also has a golden costume exclusive to Kickstarter backers with Gold Tier or higher that creates a sparkling golden trail behind the character in addition to coloring the entire character gold.

Tints in Team Battle prior to v0.9a.

A "classic" Black Mage and a pink Yoshi, on Sky Sanctuary Zone.

Green color swaps of Lloyd and Meta Knight outside, on Emerald Cave.

The process for creating "retro costumes" prior to SSF2 Beta 1.2.