Coin match is a proposed game mode for Super Smash Flash 2 where the objective is to collect as many Smash Coins as possible. These Smash Coins can be obtained by attacking other opponents, and the fighter with the most coins at the end of the match wins. Basically, the stronger the attack is, the bigger and valuable the coins will be. Should a player be KO'd, their amount of Smash Coins will be reduced to the half and the Smash Coins will be dropped on the foreground of the stage. Due to coin matches themselves never being implemented in the game as of the Beta version (the provided screenshots were pre-fabricated), in addition to the closure of the fifth Smash Flash DOJO!!! (which initially confirmed this game mode), it has long ago become an unconfirmed feature for the game and no word has been spoken as whether or not there will be coin matches in SSF2. 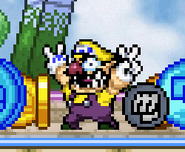 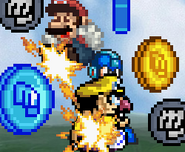 Wario hitting Mario and Mega Man with his jab, to collect coins.