Chikorita, known in Japan as Chicorita (チコリータ) is a Grass-type Pokémon. It is one of the starter Pokémon of the region Johto, alongside Cyndaquil and Totodile. It evolves into Bayleef starting at level 16, which can then evolve into Meganium starting at level 32. In Super Smash Flash 2, Chikorita appears as one of the multiple Pokémon that can be released from a Poké Ball to aid the player.

Chikorita is a small Pokémon, primarily pale green in color, with a darker green leaf and necklace of buds. It has a large head in proportion to the rest of its body, with large red eyes that appear to have no pupils. It has four short legs with a single nailed toe each, and a small tail. Its most distinguishing feature is the large leaf on the top of its head, which is usually longer than the rest of its body. Chikorita can spawn vines from its neck and create leaves from the big leaf on its head. Like many Grass-type Pokémon, its foliage emits a sweet odor that has calming and healing properties. This leaf also has the ability to check the temperature and humidity of the surrounding air.

Chikorita, like many Grass-type Pokémon, are very docile. It prefers to avoid fights by using the aromatherapeutic properties of the large leaf on its head. It spends most of its time sunbathing, although it is unclear if this is because it needs to photosynthesize, or if it is because Chikorita is cold blooded and needs to warm itself up. It appears to be sensitive to changes in its environment, and can use the leaf on its head to help purify the air around it, as well as to seek out warm places. Chikorita are also sensitive emotionally, and become very upset when misunderstood.

As stated above, Chikorita is a Pokémon that can be released from a Poké Ball. Once it is released, Chikorita will use Razor Leaf to rapidly shoots leaves in a single direction. Anyone hit by one leaf will be damaged and, possibly, might end up getting hit by all the rest. Each leaf will do 2% damage to any opponent. As Chikorita only shoots straight in front of it, its back is a blind spot where opponents can be safe from getting hit by the attack. 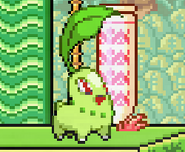 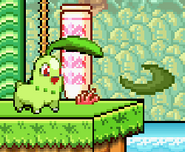