Charizard, known in Japan as Lizardon (リザードン) is a dual-type Fire/Flying Pokémon. It evolves from Charmeleon starting at level 36. It is the final form of Charmander. In Super Smash Flash 2, Charizard is a Pokémon that can be released from a Poké Ball to aid the player.

Charizard, unlike its pre-evolutions, Charmander and Charmeleon, has wings that can allow it to fly. Charizard is a very dragon-like Pokémon. Like its previous forms, it has a long tail with a fire burning at the tip. It has extremely sharp claws, a long neck, and two horns protruding from the back of its head. The front of its two wings is blue, while the back is orange like the most of its body. Although hardly visible, Charizard's iris is light blue in color. Its belly and the undersides of its feet are cream-colored.

Like its pre-evolutions, it can use a variety of Fire-type moves. Being a Fire-type starter, Charizard has the ability to learn Blast Burn. Its fire is incredibly hot, and described to be hot enough to melt boulders. Because of the wings it has grown upon evolution, Charizard can fly and use many other Flying-type abilities, and its wings are able to carry it close to an altitude of 4,600 feet. It also has access to Dragon-type moves, such as Dragon Claw, Dragon Breath, and Dragon Rage as well as Dragon Pulse. It also is able to use Shadow Claw, and expel obscuring smoke to lower the accuracy of its opponent.

Generally, a Charizard will be competitive. It loves to battle and spend a great amount of time training or looking for opponents. Its competitive spirit is also noteworthy, since it will never spit flames at a weaker foe unless provoked or commanded. When it gets very angered, the flames on its tail become a blueish-white color. It is known to have unintentionally caused massive forest fires with its tail-flame. The more experienced a Charizard, the more intense its tail flame and breath are. Charizard has been depicted in Great Bowls of Fire to repeatedly lick the people and Pokémon it is fond of, in a similar manner to a dog. The more battling it does, the hotter the flame on its tail is.

As stated above, Charizard is one of the Pokémon that can be released from a Poké Ball in Super Smash Flash 2. Once it is released, Charizard will use Flamethrower and exhale a stream of fire on both it sides 10 times while stationary, dealing more than 30 percent damage with the last hit dealing moderate knockback to opponents.

Charizard uses Flamethrower at Bowser from Pikachu on Bowser's Castle. 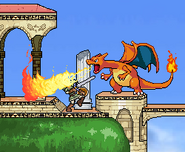