Central Highway, also known as the Highway Stage (ハイウェイステージ), is a starter stage in Super Smash Flash 2, hailing from the Mega Man series. The stage focuses on a small area of the highway with some buildings in the background as well as some destroyed cars.

The stage is banned in regular competitive tournaments. There is no proper main platform, as the stage is divided into three sections with pits between them. Said pits make recovery impossible for some characters like Ness. The stage is also very long and contains "walls" due to the platforms' uneven heights, giving characters with strong vertical KO ability a large advantage. With hazards on, the stage is somewhat more viable due to getting rid of the death pits, but it still suffers from the same problem of having very large side blast zones, as well as the other previously mentioned issues before the outer platforms collapse.

Central Highway is the unofficial name given to the first stage that appears in the game Mega Man X. X has to traverse the highway while the Mavericks are launching an assault. Constant attacks and the crumbling highway make it difficult for X to get through. At the end of the stage, Vile is encountered and eventually fought. After Central Highway, X starts his mission to take down several Mavericks.

Krystal using Sniper Rifle against Bomberman while using Jetpack on the falling platform. 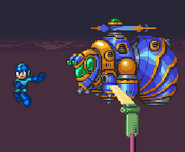 Mega Man using his back aerial near a Bee Blader.

Mega Man taunting while he and Kirby face a Bee Blader.

Samus charging her Charge Shot in the stage.

Samus standing on a platform, while Link is running after her.