Castle Wily (ワイリーじょう) also referred to as Wily Castle, was originally a stage in Super Smash Flash 2 from the Mega Man series that served as a home stage for Mega Man. It first appeared at one of the SSF2 Mini-Trailers and was finally playable in the demo v0.6. It was scrapped in v0.9a in favor of a similarly themed stage called the Skull Fortress.

The stage is based on the Castle Wily grounds from Mega Man 2. There are two walls with Wily's logo on them that players can stand on and two hover pass-through platforms between them. On the right side is the entrance of Castle Wily, there are two spaces where anyone can enter, but if one follows the way, it will result in a KO.

Mets and DeluPipis appeared as stage hazards. Mets spawned from one of the horizontal blast zones then walked around, and anyone who touched them would get hit. DeluPipis, while holding an egg, would fly from the left blast line to the right one. If it flied past a character, it would then drop the egg. Neither enemy can be attacked.

Castle Wily is the common name used for Dr. Wily's several fortresses with a skull motif that appear as the final stages of most games from the original Mega Man series. However, not all of them have names. For example, in the first Mega Man game, Wily's base is called, Dr. Wily's robot manufacturing plant, but was renamed Wily Castle in Mega Man Powered Up. They often have several hazards, mazes, strong enemies, a rematch against the Robot Masters, and a final fight against Wily inside one of his machines; like the Wily Machines and Wily Capsules.

As said before and hinted by the DOJO!!!, SSF2's Castle Wily version takes its appearance from the game Mega Man 2, more specifically the first part of the castle. However, the appearance was partially updated to look more like the levels from Mega Man 7, which explains why DeluPipis appear instead of regular Pipis. 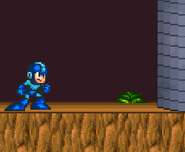 Mega Man standing in front of a building on the stage. 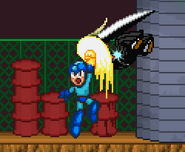 Mega Man hitting Ichigo with his up tilt. 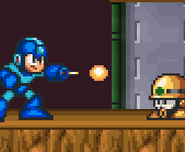 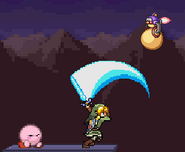 Link using his up tilt next to Kirby, while a DeluPipi flies above them.

DeluPipi arrived around the stage with carries the egg.